Hard to believe we’re halfway through the year already, but Shamedown #5 is upon us. For anyone who would like to know what a Shamedown is, please visit Cinema Shame.

It’s fitting that I picked this movie for one of this year’s Shamedowns, because a couple of months ago I got a job with a neighboring city as a school crossing guard. It’s great, because not only am I making some extra money, but I’m out talking to people and helping keep kids safe. Also sticking my large, light-up STOP sign in errant drivers’ faces, if need be (chuckles wickedly). Plus I can keep blogging, working in museums, and running my son around to his various activities, all with minimal disruption. It’s crazy, but it’s good.

However, my life seems downright placid when compared to Kate Reddy’s in the 2011 film, I Don’t Know How She Does It. Featuring Sarah Jessica Parker as Kate, it’s an approximation of the Allison Pearson novel it’s based on, only much less cerebral and way more frantic.

Kate narrates the film, but it’s also punctuated by friends and co-workers adding their own thoughts like an interview-style Greek chorus. It’s a good thing everyone is so chatty, because the narration is the only thing that keeps this rat race of a movie from falling apart. 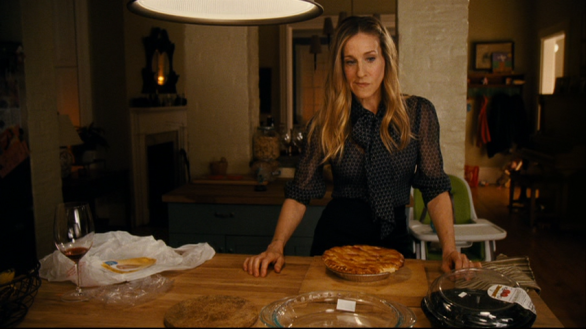 We first see Bostonian Kate (Sarah Jessica Parker) back from a business trip. As in, she’s literally just off the plane. It’s the middle of the night, and she’s torturing a cherry pie she bought at a deli into looking homemade. Her daughter, Emily has a bake sale at school in the morning, and Kate doesn’t want her to be the loser kid who shows up with something store-bought, like Kate was. Kate’s never forgotten that her mom sent two cans of cling peaches.

The other mothers are watching, natch, and like Kate’s friends, have plenty to say, only way more condescendingly and dismissively. The ironically named Wendy Best (Busy Phillips) pipes up the most, usually while pedaling an elliptical machine at her gym with other practically perfect people in the background. Wendy smiles to Kate’s face and sneers behind her back about how weird she is, but Wendy’s got her own dysfunction to deal with. She’ll never admit to it, of course. 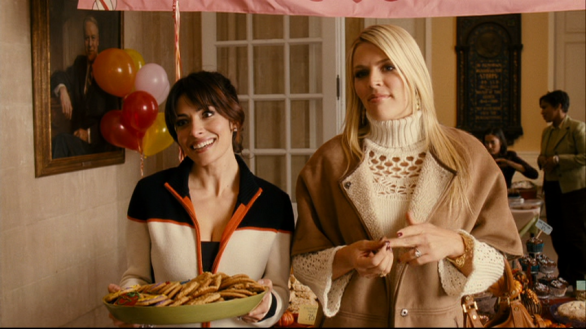 Kate’s mind is continuously busy, making lists and rushing around trying to get everything done. For the most part she succeeds, but naturally, something will give. Particularly when her boss, Clark (Kelsey Grammar) tells her she’s going to be working with Jack Abelhammer (Pierce Brosnan) on a new project, which means she’ll be in New York City two to three days a week.

Richard (Greg Kinnear), Kate’s loving husband is an architect who is often between projects, and he’s the one who picks up the slack at home. He’s also the one who’s usually around for “firsts,” such as son Ben’s first haircut or Emily’s first dance recital. They have a babysitter, Paula (Jessica Szohr), who’s often late, but she thinks Kate is a goddess of tranquility. Kate’s happy to maintain that illusion, such as on the night before the bake sale, when she hides the deli box her cherry pie came in. 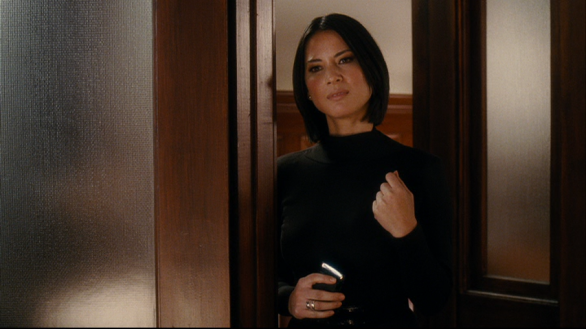 Others feel a bit less frazzled. Kate’s colleague, Momo (Olivia Mann) is a workaholic. Very severe, always in black, doesn’t like to be hugged. The woman uses not one computer monitor but six. All at once. And they’re all giant. It’s doubtful Momo goes home at night; her type just seems to go into powersave mode. She does have a personal life somewhere, because she gets pregnant, or in Momo’s words, has “a birth control malfunction.”

Speaking of malfunctions, Kate’s first trip to New York is ruined by a frantic text saying Emily’s school has had an outbreak of lice. She itches her way through her first meeting with Jack Abelhammer, and celebrates her return to Boston with a trip to the special lice removal salon. 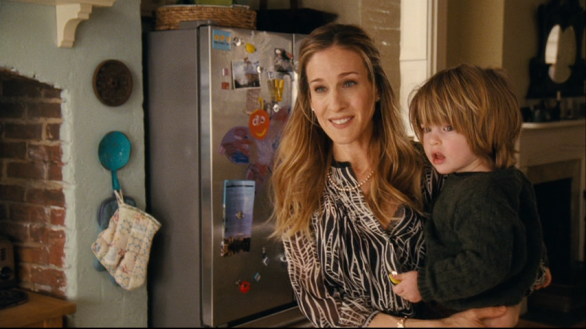 Ah yes, Jack. Since he’s Pierce Brosnan and smoldering, there’s a wee bit of tension from the beginning, at least from his side. Kate finds herself getting intrigued when Jack signs his e-mails to her “XO,” but she’s not too tempted. However, they do go bowling during a trip to Cleveland, where Jack surprises everyone with his prowess.

Kate somehow exists, but meanwhile she’s missing time with her kids. Emily resents that her mom is constantly gone, and as she gets older she’s less forgiving. Richard is patient, but even his tolerance wears thin, especially after he happens to see Kate’s e-mails to Jack. The big question is how long will it take for things to crack wide open. 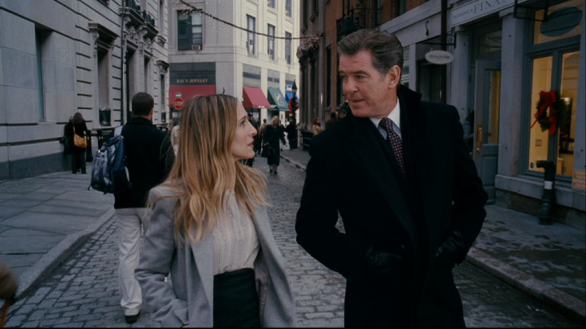 This movie has a few problems. The dialogue sounds like it was written by people who have never worked a day job. It feels awkward and uncomfortable. Worse, the film feels flat because these characters talk British sometimes but act American all of the time. I don’t know why American film companies think they have to Americanize literature from other countries.

It also is a wee bit self-conscious. The title of the movie is heard four times in the first twenty minutes as if we shouldn’t ever forget that Kate is a powerhouse of a working wife and mother. It’s a film that’s every bit as rushed and nervous as Kate is. I only really started to enjoy it at the end, because Kate was finally able to relax and breathe. 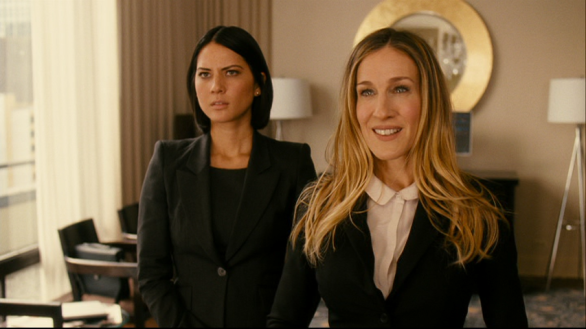 The movie fumbles, though, in what makes Kate decides she needs to make a change. In Allison Pearson’s novel, Kate’s friend of many years dies of cancer and Kate realizes she’ll never get back what time she has with her husband and her children, so she quits her job. In the film, Ben falls down the stairs and Kate makes a promise to Emily that they will build a snowman the next time it snows, both of which were handled with a considerable lack of oomph. Kate basically decides to keep working, only with a relaxed schedule.

I have to wonder if the filmmakers decided to go in this direction because of where Hollywood is politically–maybe they thought feminists would get bent out of shape if Kate simply chucked her working life. Taylor Swift recently dissed a reporter who asked if she would like to be a mom someday, saying that the question is sexist, so Kate’s statement at the end of I Don’t Know How She Does It might be pushing things for some: “Trying to be a man is a waste of a woman.” 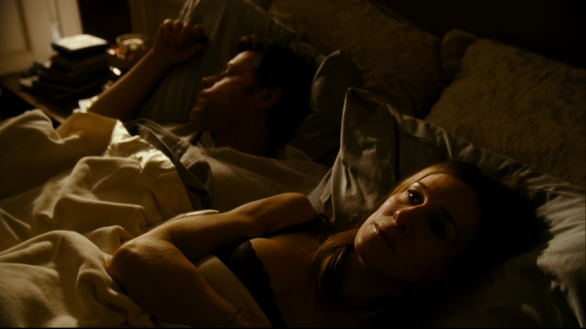 It’s too bad, because while there is such a thing as work-life balance, it can be a struggle to be truly present wherever we are. If that’s not happening, there’s nothing left to do but re-evaluate.

I think I could have enjoyed I Don’t Know How She Does It more fully if there had been more time for Kate to reflect. The novel’s Kate was crazy-busy, but she had a lot of time to live inside her head and think about her situation. I only wish Sarah Jessica Parker, who was wonderfully cast as Kate, could have had that same luxury. 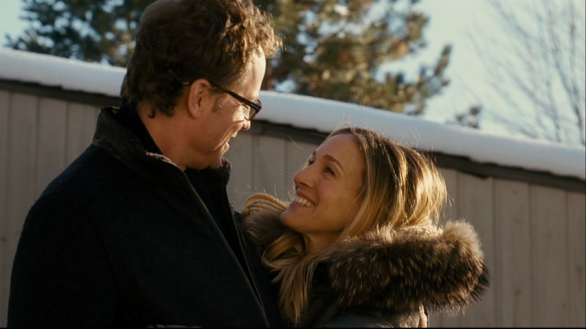 And on that note, I’m gonna take a few days off. It’s been fun, but I need to decompress and maybe play the Sims. Thanks for reading, all, and see you in a week for Gill’s Hammer-Amicus Blogathon! 🙂

I Don’t Know How She Does It is available on multi-format Blu-ray from Amazon.