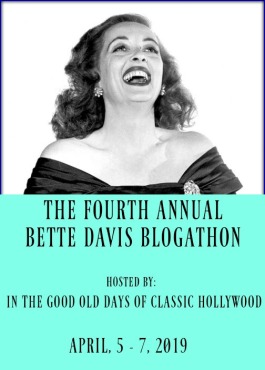 1939 is deservedly called the single greatest year in motion picture history, because more classics were produced in that period than in any other. The juggernaut was, of course, Gone With the Wind, but there were many, many movies that stood out more quietly. One of these was Dark Victory. It was an unusual subject for 1939, but one that must have touched a lot of filmgoers.

Judith Traherne (Bette Davis) is a great sportswoman and socialite. She rides, she hunts, she drives fast cars, and she parties. She’s friends with everyone she meets. She’s the picture of health, except for her drinking and smoking. Judith, whose friends call her Judy, is twenty-three with her whole life ahead of her. Someday she’ll marry and have children, but she’s in no hurry. She’s got all the time in the world.

One early morning after a wild night of carrying on, Judith gets a call at 5:30 AM from her Irish stablemaster, Michael (Humphrey Bogart) about which horses he should sell. She and her best friend, Ann (Geraldine Fitzgerald) race down to the stables to keep Michael from doing anything rash, and their friends are already assembled. One of them, Alec (Ronald Reagan) is plastered, or maybe the drinking of the previous night never stopped.

Judy takes a jump on one of her horses, and when she looks at the fence she sees a double image. She pulls right, and the horse falls. Amazingly enough, neither one of them are injured. Judy chalks up the whole thing to being tired and hung over. She’s had headaches off and on for months, but she doesn’t think a thing about it. Well, not much, anyway. She tells Ann about several instances when her vision has blurred. Once on Park Avenue she even bumped into a woman’s leash while she walked her dog. Not the dog or the woman, just the woman’s leash.

Her doctor, Dr. Parsons (Henry Travers) happens to be there, and he’s concerned. So is Ann, and when she talks to Judy about it, Judy cheerily brushes off her worries. Then she rushes to another function and falls down the stairs.

Dr. Parsons practically drags Judy to Dr. Fredrick Steele (George Brent), an eminent brain surgeon. Fredrick knows right from the start that something’s wrong with Judy. He tests her reflexes and looks into her eyes. Most telling of all, he notices that she can’t tell what she’s holding in her right hand. Silk and burlap feel the same, and a pencil is a mystery. It doesn’t take much for him to diagnose her definitely: Judy has glioma, a type of brain cancer, and needs an operation. Judy is in denial, but there’s nothing she can do. 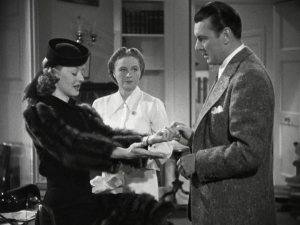 The day of the surgery arrives, and Judy is scared stiff. She doesn’t like the hospital bed or the nightgown she has to wear. The ones she’s brought are much prettier. Judy does take her sedative, though, and once Fredrick shows her how her bed can move up and down, goes to sleep happily.

The procedure is a success, but Fredrick and the other doctors are grave. Judy’s cancer will come back, and it will eventually kill her. She won’t feel any pain, however, and death will be heralded by loss of vision and then blindness. Dr. Parsons and Fredrick don’t think she should know, however, and allow Judy to believe the the cancer is gone.

Back home in Long Island, Judy is bubbly and exuberant to be given what she thinks is a second chance at life. Her only concession to her glioma surgery is the hat she wears to cover up her scar. She has a party to celebrate being alive, and naturally she invites Fredrick to thank him. Fredrick comes, but he can’t help looking glum. Ann finally gets a confession out of him: Judy is living on borrowed time. It’s horrifying news, but Ann agrees that Judy shouldn’t be told.

Judy and Fredrick fall in love and get engaged. In the midst of this, Fredrick closes his practice and takes up research, moving to Vermont. Judy comes by his office to pick him up for lunch, and just happens to see her file on Fredrick’s desk. Her curiosity gets the better of her, of course, and she’s shocked to see “PROGNOSIS NEGATIVE” on report after report from the other doctors evaluating her case.

Fredrick finds Judy at the restaurant, where she’s inhaling cocktails. She’s not just devastated, but also livid that Fredrick kept the truth from her. Ann is equally guilty, as she went along with the idea. Judy storms off, meets up with Alec, and drinks some more.

Over the next several months, Judy goes about her business. She’s still cheery, but in a brittle, tense way. Fredrick finally confronts her: When death comes, will she die beautifully and finely? Judy flounces off and ends up pouring her heart out to Michael, who’s secretly been in love with her. 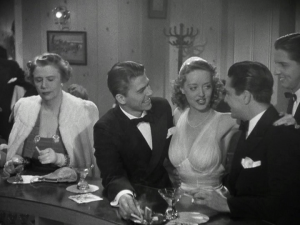 None of this delays the inevitable, of course, and Judy has some issues to work through.

The film was a hit with both the public and the critics. I can see why Dark Victory would resonate with people, because we’ve all known someone who’s had to deal with life-threatening illness, or maybe gone through it ourselves. One of my exes is a survivor of brain cancer, and his symptoms were very similar to Judy’s–double vision, headaches, fainting, clumsiness, and so on. I can’t remember if he had glioma, but the film gives me a slight idea of what his experience was like. It goes without saying that cancer is not something to be wished on anyone. 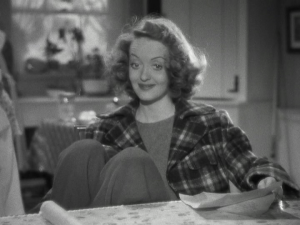 One of the great things about Dark Victory is the pacing. It lightens up when it’s most needed, and this is a good thing, because otherwise it would collapse under its own weight. A film where the lead character is doomed to die isn’t the cheeriest of prospects, and it tackles a subject that wasn’t and isn’t really talked about. “It’s not brain surgery,” is more of an expression than an actuality for most people.

Dark Victory has a great cast. It’s a nice novelty to see Humphrey Bogart in his second banana days, making a game but mostly non-existent attempt at an Irish brogue. Some actors famously don’t like doing accents, and maybe Bogart should have joined that crowd. Still, his performance is every bit as intense as Bette’s for what it is. Another fun bit is watching the future governor of California and President of the United States in his days as an actor, even if he drinks like a fish in every scene. It doesn’t matter; today’s audiences know where he ended up.

Bette Davis did an amazing job in Dark Victory, which netted her an Oscar nomination. She didn’t take home the statuette, probably because of her win for Jezebel the previous year, but in a way she was already a winner. Judy was the type of part that Bette Davis ate up with a spoon. It showcased all her moods, it was dignified, it had some bite, and it had a death scene. She could have made Judy a lot meaner, but she didn’t, which invites viewers to really feel for her. It’s a challenging role, and she did challenging so well because that’s who she was. Davis later considered Dark Victory to be one of her favorite films.

For more of the great Bette Davis, please see Crystal at In the Good Old Days of Classic Hollywood. Thanks for hosting, Crystal–it’s always fun! Thanks for reading, everyone, and see you tomorrow with a tribute to another brain cancer victim, only this one is real…

Dark Victory is available to own on Blu-ray from Amazon.