There’s no getting around it: Little Shop of Horrors is an unusual musical. Anything with a carniverous talking plant is not going to be a typical garden-variety story (See what I did there? 😉 ).

What’s really unusual is that Little Shop of Horrors started out as a 1960 Roger Corman film, then became a stage musical in 1982, and made into another film, released in 1986. Nowadays, of course, adapting films for the stage is so commonplace it’s almost expected, but roughly four decades ago it wasn’t really done.

For those who aren’t familiar with the story, Horrors is about Mr. Mushnik’s flower shop on Skid Row in New York City. The place is dismal, no one’s buying, and the street has nothing to recommend it. Mr. Mushnik has two loyal employees, though, Seymour and Audrey, and one day Seymour finds an otherworldly plant he thinks might turn things around. It starts out looking like a cross between a century plant and a beefy Venus flytrap. Seymour is secretly in love with Audrey, and he names the plant after her.

The only problem is, Seymour can’t figure out what to feed it. Audrey II doesn’t want water, or plant food, or extra sun. Seymour is at a loss until he accidentally cuts his finger and a drop of blood falls into Audrey II’s mouth. Audrey II slurps it hungrily.

This is where things get weirder.

Audrey grows exponentially, and so does its appetite. Seymour has to feed it bigger and bigger things. Raw meat. More of his own blood. Then…bodies, like that of the crazy drunk who jumps in front of a train. Any accidental deaths are fair game for Seymour. Plus, Audrey talks. And it’s demanding: “Feed me, Seymour.”

Seymour quickly gets in over his head. On the bright side, though, Audrey loves him, and the shop is thriving because of their nifty novelty plant. Too bad it’s spoiled rotten.

Corman’s film has a seat-of-the-pants history. According to TCM, the original screenplay was written by Charles Griffith, the son of vaudeville and circus performers and mentor of Corman. The movie was shot at the Old Chaplin Studios with preproduction and shooting coming together in five days.

And why? Corman was dared to shoot it that fast, and it shows. Everything about it looks quickly and cheaply done, including obvious ADR and sets that seem like they could fall over if anyone sneezes. It also has a haphazard narrative structure, as about two-thirds of the way through the film the action moves to a detective office, where the agents are discussing the mysterious plant and what should be done. The detective on the case provides exactly thirty seconds of narration once during the film and is never heard from again. Corman wanted the private eye-angle to be stronger, and seemed to be determined to include it somehow, by hook or by crook.

However, the film is funny in a horror-camp kind of way. There’s the woman whose relatives are always dying, and the guy who eats flowers, and the guy who doesn’t mind going to the dentist (Fun fact: It’s a young Jack Nicholson). Audrey II was originally named Oriole Plove, and Seymour was Irish Eye. Corman was a newer filmmaker at the time, and the level of camp was not up to what he did later in his AIP films, but his trademark style was beginning to show. Griffith was a great mentor for him.

The film received good reviews, but, like a lot of studio era movies, built a following from being shown on TV. By then Corman’s AIP popularity helped make Horrors a cult favorite.

In 1982, the musical premiered off-off Broadway. According to IBDB, it first opened at the Player’s Workshop, then went to the off-Broadway Orpheum, where it ran for five years (See the first act of the original production here) and 2,209 performances. The musical’s numbers are excellent, having been written by one Alan Menken. The book was written by Howard Ashman, who had seen the movie several times as a kid and loved it. He and Menken had to get permission from Corman’s lawyers, and then they were off. Writing the musical took eight weeks.

Ashman and Menken weren’t blindly gaga over Corman’s movie. They knew it had a sloppy execution (Ashman said it “fell apart in the middle, and had a weak ending.”), so one of the first things they did was tighten the story arc. Among the initial changes: Seymour feeds Audrey II characters who have died as opposed to random people. Or, sometimes Audrey II just chomps them. Naturally, more of the action is restricted to the flower shop, whereas in Corman’s film the characters left now and then to go to dinner. The private eye angle was jettisoned as well, seeing as it was excess baggage anyway.

The musical eliminated a few characters from the original film, such as Seymour’s hypochondriac mother, and changed the ending to something happier (yeah, not going to spoil it). It also added a girl group who were always around to sing their commentary, literally called The Greek Chorus. The sadistic dentist’s name was changed from Dr. Phoebus Farb to Dr. Orin Scrivello, with a much more expanded role as Audrey’s jerky greaser boyfriend. In Corman’s film, he’s stabbed with a dental instrument. In the musical, he dies from laughing gas and Seymour feeds him to Audrey II in a bit of irony.

In 1986 the feature film of the musical was released. Directed by Frank Oz, it’s a quirky delight, and the cast reads like an SNL roll call: Steve Martin, Rick Moranis, Jim Belushi, Bill Murray, and John Candy all star. Ellen Greene, who had played Audrey in the original production, was brought in to play her onscreen, although amazingly enough, producer David Geffen originally wanted Cyndi Lauper. Appropriately enough, Mushnik was played by Vince Gardenia, who said later that he got the part because Frank Oz liked his name. 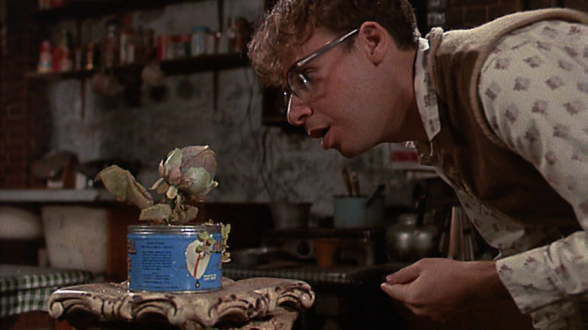 The musical film has a somewhat happier feel to it, as the ending is changed again (not going to spoil that, either), and the cast evidently loved their jobs. Steve Martin in particular sells his role with relish, like Elvis with a dentist drill. He’s probably the scariest part of the movie, which makes his demise a relief. Rick Moranis as Seymour was a natural, as he plays such a good nerd. He and Ellen Greene are so cute together. Just as in the stage version, Audrey dreams of a happy life with Seymour, only this time it includes clips of I Love Lucy.

1986 Horrors also has a grittier feel, as the streets and sets look grimy and run down. Costumes and props were bought at thrift shops to give an authentic nineteen sixties look. The set decorator, Tessa Davies, was even sent out to hunt for old garbage cans in people’s yards, which she would offer to replace with new ones. 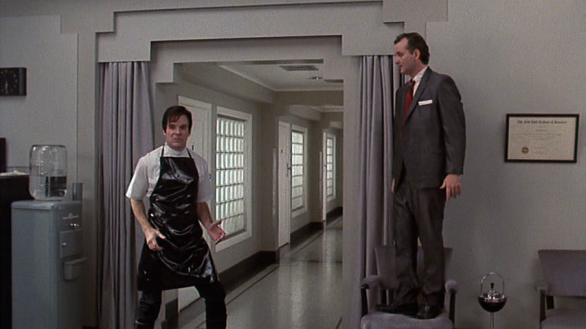 The film was a huge hit with the public and most of the critics. Roger Ebert called it “the kind of movie cults are made of.”

Yes. Yes, it is. A movie with a ravenous talking plant can’t be anything but.

Little Shop of Horrors has become a fixture in Western culture. Audrey II is the especial star, as homages and tributes pop up all the time. “Feed me, Seymour!” is right up there with, “Toto, I have a feeling we’re not in Kansas anymore.” Schools and local theater groups put the musical on all the time. Ellen Greene reprised her role as Audrey yet again in 2003, with Jake Gylenhaal playing Seymour.

And why do we love Horrors? It’s a weird story. It’s sadistic in some ways. It’s bloody. It doesn’t have a cookie-cutter ending in any iteration. It’s also sneaky, making moon eyes at us right before it chows down, and then making us forget it just took a bite out of us by doing something else winsome and fun. It’s a roller coaster of expectations, and people like entertainment that makes them bring all their feels.

Thanks for reading, and I hope you’ll all check back here tomorrow. Got a big announcement…

Both the 1960 and 1986 versions of Little Shop of Horrors are available to own from Amazon.