Hitch is back once more, people.

Hitchcock’s early period has always intrigued me. It was before he went to Hollywood, before he had big studio money behind him, and while he was still finding his footing as a filmmaker. One of his later newbie films is 1935’s The 39 Steps.

Our story begins at a theater, where a young man, Hannay (Robert Donat) has just bought a ticket to a music hall show. The emcee introduces someone named Mr. Memory, who can reportedly absorb facts like a Bounty paper towel, and hold on to them, too. The audience peppers him with questions ranging from history to sports to just plain old trolling. Hannay even gets into the act by asking Mr. Memory what the distance from Winnepeg to Montreal is.

For some unclear reason a fight breaks out, and there’s a gunshot from somewhere, so everyone makes a dash for the door. On the street, a young woman, Miss Smith (Lucie Mannheim) approaches Hannay and asks to come home with him. What can possibly go wrong?

When they get to Hannay’s apartment, Miss Smith is as jumpy as a cat. She won’t let Hannay turn on the lights unless her back is to an inside wall, she wants the curtains drawn at all times, and she thinks the phone ringing means someone knows she’s there. Miss Smith sucks down the drink Hannay gives her and consents to go to the kitchen for a snack.

Miss Smith tells Hannay she’s being pursued by two men who want to kill her. She’s a covert agent without a country who’s trying to protect a secret for England. A foreign agent is looking to siphon information about England’s air forces, and has a hate-on for Miss Smith because she thwarted his efforts. 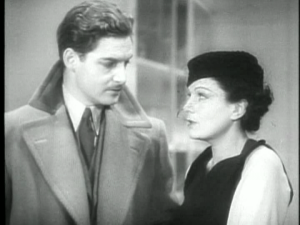 Hannay doesn’t believe it and thinks Miss Smith has a persecution mania. Miss Smith tells him to look for two men down in the street. Hannay does, and sees two men in trenchcoats smoking on the corner. Hannay is now convinced, and he wants to know what he should do next. Miss Smith needs to go to Scotland, and she tells Hannay the man who’s after her has only half a pinkie.

Miss Smith sleeps in Hannay’s bedroom while Hannay passes out on the living room couch. In the early morning, Miss Smith staggers in, holding out a piece of paper and gasping, “Clear out, Hannay, they’ll get you next,” before collapsing. She’s been stabbed in the back.

The piece of paper Miss Smith was holding is a map, with Alt-na-Shellach circled on it. Hannay sneaks out of his building with a little help from the doorman and hops a train to Scotland. To his dismay, he finds Miss Smith’s murder is all over the papers, and he’s the prime suspect.

Yep. If a total stranger asks to come home with you, kids, just say no.

No sooner is Hannay over the Scottish border than the police come after him. He kisses a young woman, Pamela (Madeleine Carroll), on the train as a cover story, but it doesn’t fly, so he jumps off and makes for a farmhouse, where he attempts to stay the night. No dice, though–the police are close behind. The farmer’s wife gives him her husband’s overcoat, after which Hannay beats a hasty retreat.

Hannay heads for Alt-na-Shallach, where he finds Professor Jordan (Godfrey Tearle), the man Miss Smith was supposed to see. He’s very respected in the community with a title and a house to match. The maid lets Hannay come through the front door in just in the nick of time, as the police are hot on Hannay’s trail. They’re chasing him over highlands on foot and by autogiro.

Unfortunately, Professor Jordan is not what he seems–he’s got the half-pinky Miss Smith alluded to, and he attempts to shoot Hannay. It made me wonder if The 39 Steps was going to be like Psycho, with the lead killed off halfway through the proceedings, but no. By pure chance, a hymnbook in the farmer’s overcoat pocket stops the bullet and Hannay heads for the sheriff’s office. He tells the sheriff (Frank Cellier) the whole story, but is taken prisoner for his pains. The professor is the sheriff’s best friend, natch. Hannay gives them the slip, though, ducking down alleys and around corners.

By mistake, he finds himself in a political meeting for a Parliamentary candidate he doesn’t know, and he has to make a speech. Hannay bellows out the usual tropes people expect during election season, reading the candidate’s name off an upside-down sign just for extra legitimacy, and the crowd goes wild.

Hannay’s break is short-lived, though, as Pamela, the woman he kissed on the train, happens to be in the audience. He makes a beeline for her, but she’s still mad about the kiss, so she turns him in to the police. Pamela’s not off the hook, though, as she’s brought along for questioning. 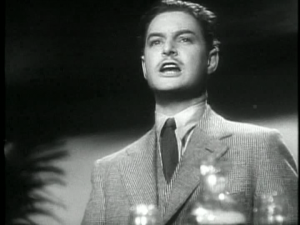 A herd of sheep blocks their way, and before the detectives clear them out, they handcuff Pamela and Hannay together. Hannay sees his opportunity to make a break for it, so he all but drags Pamela to a country inn, where they pose as a young couple.

Hannay’s really got himself in a jam now. He’s not only got to figure out who the missing link in the case is, but he’s got to convince Pamela he’s not a kidnapper or a murderer. And where do the thirty-nine steps come into play? In true Hitchcockian mode, the suspense is drawn out to the last possible second.

The 39 Steps is a classic film. It’s got all the usual Hitchcock stamps–pairs, a Hitch cameo, plenty of humor, and loads of twists and turns. It moves quickly, with any unusual details becoming clear in the end. It’s even got a cool blonde as the female lead. Robert Donat is an elegant leading man, and it’s fun seeing him pre-Mr. Chips.

There’s a lot of realism, too. According to IMDb, Madeleine Carroll got welts in her wrists from the handcuff scenes, which took days to shoot. Incidentally, she and Donat didn’t meet until the first day of shooting, so the keep-away looks she gives him in their initial scenes together have more than a little authenticity. They had a fun chemistry, sparring one minute and allying the next. 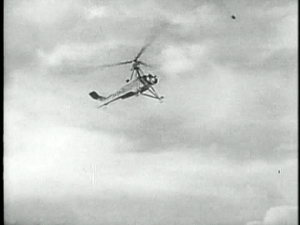 A few things are a wee bit dated. The autogyro, for instance, would have already been on its way to being passé in 1935, not to come back in until after the Second World War, although it was used in mail delivery. It seemed so random and old school that I laughed my head off when I saw it.

Other points were a little uncomfortable. When the farmer finds out that his wife gave Hannay the overcoat, he slaps her quite hard across the face. We don’t see anything, but we hear the slap and the woman’s scream. It’s a disturbing moment, albeit a brief one.

The film did very well for Hitchcock. It was the point at which his star was really on the ascendent, and The 39 Steps is the second film of Hitch’s to make a hit overseas. It’s still considered one of the best British films of all time, and the type of movie that yields new details with each viewing.

For more of the Alfred Hitchcock Blogathon, please see Maddy at Maddy Loves Her Classic Films. Thanks for hosting, Maddy–I always look forward to Hitchcock time! Thanks for reading, all, and hope to see you next week for the Arthur Kennedy Blogathon. Have a good one…

The 39 Steps is available on Blu-ray from Amazon.

5 thoughts on “Step In Time”