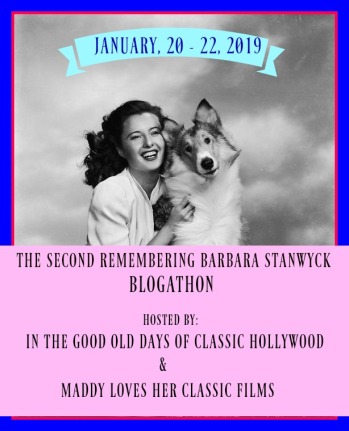 In 1953, the Titanic disaster was only forty-one years in the past. Many of the survivors were still alive. However, the tragedy had all but passed from public consciousness, as between the sinking and the nineteen fifties, there were several wars, the Great Depression, and a sense of just wanting to live a normal life. That all came to an end with the release of the 20th Century Fox film, Titanic. Starring Barbara Stanwyck and Clifton Webb, it blended a fictional story with depictions of the real passengers and crew of the doomed ship.

Naturally, the film opens at the Titanic’s departure from Cherbourg. Everyone is in a festive mood, and among all the “Happy Maiden Voyage” bouquets and telegrams is a package for Captain E.J. Smith (Brian Aherne): the flag from the Star of Madagascar, the ship on which he made his first voyage as captain. The flag is immediately hoisted and passengers are streaming onto the ship. 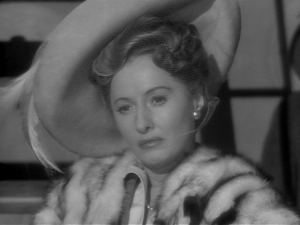 One of the tugboats carries Julia Sturges (Barbara Stanwyck), a wealthy socialite. She’s traveling with her children, Annette (Audrey Dalton) and Norman (Harper Carter) but without her husband, which prompts questions from Sandy Meeker (James Todd), an old friend she meets onboard. Julia is politely evasive, and calls Annette and Norman over to say hi to Sandy. Also onboard are John Jacob Astor and his pregnant wife, Madeline, plus Maud Young (Thelma Ritter), new money from Montana. Yes, she’s based on Molly Brown, who was called Margaret at the time of the sinking.

Meanwhile, Julia’s husband, Richard (Clifton Webb) buys a third-class ticket off the husband in a Basque family. He takes the remaining members in charge when he goes on board the Titanic, and then corners his family at dinner, much to Julia’s chagrin. Julia spills out why she’s there with the kids: She’s tired of the pretension of high society life and doesn’t want her kids growing up to be spoiled little snobs, so she’s taking them to her family’s home in Mackinac, Michigan. 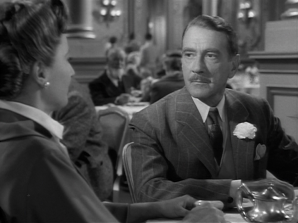 Richard is immeasurably insulted and disdainful because he takes Julia’s meaning as she doesn’t want Annette and Norman to be like him. She’s got him pegged, though–Richard makes snide remarks about anyone of the lower class whenever he gets the chance. He also messes up Julia’s plans of when to tell the kids that they’re moving. Annette’s not happy to say the least.

Speaking of Annette, a Purdue student, Giff (Robert Wagner) has been giving her the eye. He’s a nice kid, but she’s barely polite to him, at least at first. After fighting with Julia, Annette dances with Giff because she knows her mother likes him. After that she starts liking him in spite of herself, and she and Giff fall in love. 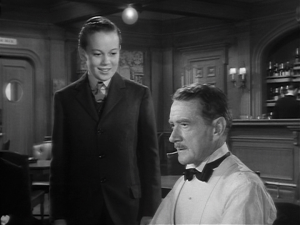 Poor Norman is caught in the middle of Julia and Richard’s marital troubles, although he doesn’t know it. He looks up to Richard and wants to be like him. He’s also keen for them to win the shuffleboard tournament. However, Richard’s attitude towards him freezes when Julia tells him Norman is her son by a one-night stand. Richard buries himself in a never-ending bridge game and when Norman comes to get him for the shuffleboard tournament, Richard gives him the cold shoulder. Norman walks away, confused and hurt, not knowing what’s going on.

All of this takes place while the Titanic heads towards her inevitable fate. The Sturges family is a means to an end, but their story is distracting enough that it’s easy to forget they’re on a doomed liner. Once the ship hits the iceberg, the Sturges are thrust into the real-life tragedy, standing by while families are separated, Isidor and Ida Strauss decide to stay together, and third-class passengers are all but forgotten. The Sturges may be fictional, but their part in the sinking is no less heartbreaking. Spoiler alert: Norman gives up his seat in a lifeboat to an old lady and dies with Richard. Incidentally, while shooting the lifeboat scenes, it hit Stanwyck that she was recreating a true event, and she broke down crying. 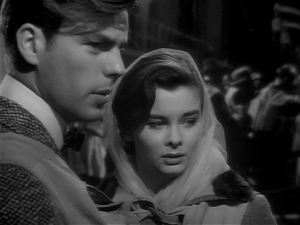 Titanic does have a few blunders. It was not sold out at the time of leaving Cherbourg, ergo, Richard buying the Basque man’s ticket wouldn’t have happened. The sets don’t look quite correct to the real ship. The underwater shots of the ship hitting the iceberg show it on the port side instead of the starboard. The boilers never exploded. Norman would have very likely survived, as only one first class child died during the sinking: a little girl named Loraine Allison.

Most of all, the wardrobe only looks vaguely Edwardian–the cuts of the dresses are fairly accurate, but well-to-do women in that era would have also sported elaborate beading and trimming on their gowns, depending on the time of day. They also would have changed up to four or five times throughout the course of the day, and the characters in the film wear the same costumes all day long and into the night. That, plus Titanic’s lack of ornamentation says the costumes may have been thrown together in a hurry, as well as done cheaply. Also, Stanwyck’s gowns seem to have more in common with the nineteen-fifties than 1912. However, linking to a film’s time of production is a common practice of costumers because they believe it makes a period piece more relatable to audiences. 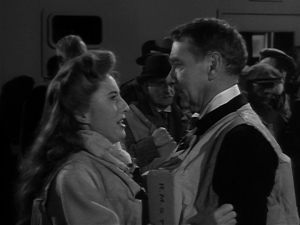 Other flubs were beyond the filmmaker’s control, namely the Titanic sinking in one piece. At the hearings in London and New York, many passengers testified that they had seen the ship break in two as it sank. Oddly enough (or not) there were first-class passengers and White Star employees, including Bruce Ismay, who swore up and down that the ship sank intact. According to the thinking of the time, White Star people and first class passengers had more credibility, so the official story in the fifties was that the Titanic slid serenely into the water. It wasn’t until Robert Ballard discovered the wreck of the ship in 1985 that the testimony of the majority of survivors was proven out. The first time the Titanic was portrayed sinking in two pieces was in the 1996 miniseries.

Some people were so bugged by this film’s inaccuracies that they went out of their way to correct them. One of the biggest answers was Walter Lord’s classic history, A Night To Remember, which was released as a feature film in 1958, but we’ll get into that another time. 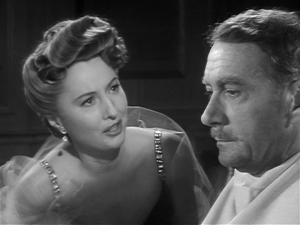 I first saw Titanic in high school, and then bought it on DVD several years ago. It wasn’t so much the ship sinking that I remembered before I saw it again, but the characters, particularly Barbara Stanwyck, whose Julia is steely and steady. She was such an elegant lady that the part is an easy one to picture her in, and she purrs her lines to Clifton Webb in a husky, no-nonsense tone, staring down his snobbery.

At the same time, there is love beneath their scornful looks. Stanwyck and Webb make the viewer wish that their story could be different, that they could somehow succeed. If these characters didn’t need some real test to push them forward, the Titanic angle could almost be skipped entirely. Still, it’s there, and it’s a Kleenex-grabbing moment. 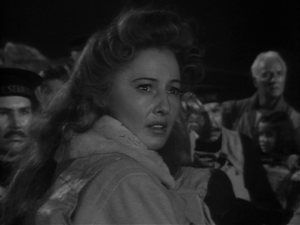 For its small inaccuracies, Titanic deserves its place in the canon of films about the tragic sinking. Not only is it an absorbing portrayal, but it was an “aha” moment for many people. The performances of Barbara Stanwyck and the rest of the cast surely help it stay in the mind as well.

For more of the Barbara Stanwyck Blogathon, please visit Crystal at In the Good Old Days of Classic Hollywood and Maddy at Maddy Loves Her Classic Films. Thanks for hosting, ladies–it was a pleasure, as always! Thanks for reading, all, and see you next time…

This film is available on DVD and Blu-ray from Amazon.

16 thoughts on “Back To Titanic”