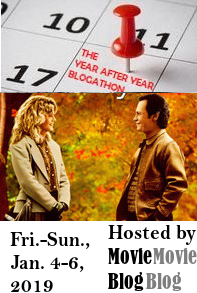 The time for our first blogathon of the year now approaches…

Who can forget what it was like to live through the Cold War? For us regular people (in America, anyway), life would go on in its happy, placid way until something would happen and it would be like, “Oh yeah, the Russians might drop a nuclear bomb on us.”

Some people dealt with this type of thought more zealously than others, and at one time installing a home fallout shelter was usually the method of choice. Most went with whatever Civil Defense approved of, or maybe built fancy multi-room complexes. However, I highly doubt any of them went as far as Calvin Webber in 1999’s Blast From the Past.

The Webbers live in a cute little Pasadena house, and they’re a tiny bit…unusual. Well, Calvin (Christopher Walken) is, anyway–Russia and the Communists are sore topics. He’s taken rather extreme measures in the backyard. It’s all a deep secret, of course. His wife, Helen (Sissy Spacek) loves to cook, and she and Calvin are expecting their first child.

One night, the Webbers host a dinner party at their house. There are mountains of food, and Helen tops the feast off with a giant pot roast. A guest arrives late bringing nervous tidings of doom: Kennedy is facing down Krushchev on TV. After solemnly watching the speech, Calvin calls for a “prayerful watch-and-wait stance,” and sends his guests home. He wastes no time hustling Helen out to the backyard, lugging her uneaten pot roast, because as far as he’s concerned, the descent of the bomb is nigh.

Actually, it’s not a bomb descending, but a malfunctioning fighter jet on its way back to the local Air Force base. The pilot’s bailed out, and the plane is dropping right into the Webber backyard. The explosion shoots fire down the shelter hatchway, and Calvin freaks out because all his instruments break. He closes the door, whose locks ominously slide shut, not to open again for thirty-five years. Yep. Because the half-life of nuclear bomb radiation lasts that long (Actually, that’s high level nuclear waste, not nuclear bombs, but why quibble?).

Helen lays down in the bedroom for a nap, and afterwards surveys their new surroundings. It looks just like their house, only underground, with lots of futuristic equipment around it. She’s creeped out, of course. Her yard is now made of concrete and the green turf they use at mini-golf courses.

Calvin is feeling pretty good. The shelter is his pet project. They’ve got everything they need for thirty-five years, from dry goods to hydroponic produce to a tank teeming with fish to tranquilizers and cases of Dr. Pepper, which Calvin likes to drink hot. They have power from yacht batteries and water from a well. Calvin’s worst fears have been realized, validating his time and effort. He’s not even all that nervous when Helen goes into labor and he delivers the baby himself, a boy they name Adam.

The next thirty-five years are straight out of Leave It To Beaver. Adam (played at various ages by Hayden Tank, Ryan Sparks, and Douglas Smith) grows like a weed, and in between homeschooling and rollerskating around the shelter, he takes dance lessons from Helen and pugilism from Calvin. There’s shuffleboard, home cooking, and plenty of Perry Como music. Calvin even rigs a projector to look like a TV, and the family snuggles up on the couch to watch The Honeymooners. Calvin’s in seventh heaven, Adam doesn’t know any differently, and Helen is going stir-crazy, making cocktails out of the cooking wines.

For all his forward planning, Calvin never brought down a radio, so the family has no idea what’s going on above their heads. Calvin thinks it’s just plain old signs of life, and he’s right. A malt shop with a cheery blonde lady running it, assisted by a college-aged soda jerk (Joey Slotnick) is cheerily serving up banana splits and milkshakes. Then it turns into a bar, and later into a really trashy bar. Finally, it’s just abandoned, with the former soda jerk living in it and talking his heart out to his buddy while they drink tequila out of old candle holders.

Eventually, thirty-five years tick down, and one night the family is awakened by the doors unlocking. Calvin has no idea what kinds of mutants lurk above ground, so he ventures forth in a radiation suit, his elevator bringing him right up into the abandoned bar. The soda jerk keels over in shock, and Calvin looms over him ominously with a flashlight. “Leave my elevator alone,” he intones, rasping like Darth Vader.

The movie seems to go out of its way to show how much everything changed since Calvin and Helen went into their shelter. Calvin sees what he thinks is a post-apocalyptic war zone. Everything is trashy and sleazy, with a drunk being pushed out of a bar and thowing up in a gutter. Calvin is propositioned by a prostitute and then stumbles into an adult bookstore. He’s so traumatized that when he tells Helen about it he has what appears to be a heart attack.

The family needs supplies, and Helen sends Adam (Brendan Fraser). Adam is like a ten-year old kid and naïve to a fault, but off he goes, clad in a sportcoat and slacks made out of bedspread fabric. He’s thrust into a strange new sphere of hotels, superstores, and color TV, and it would be a pretty unfriendly place if he hadn’t met Eve (Alicia Silverstone).

Eve is a cynical woman of the world who has been burned by love and flits from job to job. She meets Adam in the hobby store where she works as the owner tries to snooker Adam into selling his dad’s baseball cards for way less than they’re worth. Not surprisingly, she gets fired for outing her boss as a crook, and Adam pays her with a Rogers Hornsby card to drive him to a Holiday Inn.

The next morning, Eve comes back to the hotel to return the baseball card, because she doesn’t feel right about taking it. She thinks Adam is like a lost puppy, and is about to leave, but he talks her into helping him buy all his supplies. He leaves out the reason why, though, and Eve accepts dubiously.

Adam sets to work buying everything his parents need. Eve goes along with it, although she’s a bit baffled as to what the yacht batteries are for. She’s also a bit baffled at Adam’s other plan: He wants to find a wife. In two weeks. Fortunately for Adam, it’s the late nineties, when ska was swinging. Eve and her gay roommate, Troy (Dave Foley) take Adam to a night club, where he wows the crowd with his dancing skills.

Eve’s no dummy, and she knows there’s more to Adam than meets the eye. She may seem like the worldly one, but Adam just may have a few things to teach her as well.

This film requires mondo suspension of disbelief, and we’re going to start with the Webber food supply. While farming fish and growing hydroponic vegetables and fruit underground are plausible, dry and frozen goods would have been in a truly dismal state after thirty-five years. Pasta would taste like cardboard, flour would have no rising properties whatsoever, spices would have little flavor, and any frozen foods would have serious freezer burn. The obvious solution is vacuum sealing, but commercial sealers didn’t hit the market until 1963. I’m amazed Adam’s thirty-third birthday cake came out the way it did.

It’s also amazing that these people were still civil to each other after thirty-five years of nonstop togetherness. Maybe it was the diet of fifties sitcoms or the fact that the Webbers were stuck in 1962, but it would take a tremendous amount of discipline to keep from being at each other’s throats.

Speaking of throats, the Webbers’ immune systems would have been completely shot as soon as they left their shelter. This is pretty common for people who live in closed environments, such as cloistered nuns, but even cloistered nuns are exposed to outside elements now and then. Adam should have been flat on his back with any number of ailments after a day or two of being outside, but hey, it’s just a movie.

Blast From the Past’s strongest scenes are in the first half, because Sissy Spacek and Christopher Walken really do goofy and eccentric well, and as a pair they play off each other effectively. That they would have an equally goofy kid like Brendan Fraser is not out of left field. The only problem is that it stumbles once Adam’s on his own because the satire angle is diluted and the film tries to make up for it with crudeness. We go from being charmed by 1962 to being repulsed by 1999. It’s nice to see Adam grow beyond his parents, but it ends up being a rather ironic and sobering commentary on America’s social scene.

Overall, Blast From the Past is a cute film with a lot of great moments. I think it could have been cuter, but it’s a good time all the same.

For more of the Year After Year Blogathon, please pay a visit to Movie Movie Blog Blog. Thanks for hosting, Steve, and thanks for reading, all–it’s been fun. See you later…