The Barrymores have returned, y’all.

MGM had a thing for ensemble films in the early thirties. Why have one box office draw when more just makes everything better? John and Lionel Barrymore got to be in on a few of these extravaganzas, and one of the most well-known is 1933’s Dinner At Eight. Like their earlier hit, Grand Hotel, it weaves the stories of several characters in and around each other, all culminating in the inevitable payoff.

The film opens with Millicent Jordan (Billie Burke) all in a flutter. Lord and Lady Ferncliff from England have sent her a cable, and are coming to her dinner party next Friday. She tells her husband, Oliver (Lionel Barrymore), who is considerably less ecstatic about the whole thing. The Ferncliffs will make the Olivers the envy of New York’s high society, and Millicent is determined to drop their name as often as she can. 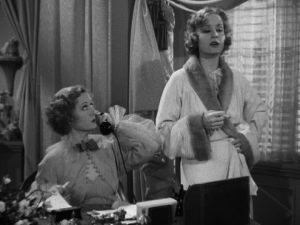 Millicent and Oliver’s daughter, Paula (Madge Evans), isn’t exactly jazzed about Lord and Lady Ferncliff, either. She doesn’t even seem all that excited about being married to her fiancee, Ernest, in a month. Millicent wants Paula to go shopping for her trousseau, but Paula says she can’t because she’s going to a concert.

What Paula and Millicent don’t know is that Oliver’s shipping business is in trouble. There isn’t enough cargo to ship, so why bother shipping? It’s the Depression, and even shipping magnates are feeling the pinch. Another shipping company muckamuck, Dan Packard (Wallace Beery) is hanging around like a bird of prey, hoping to buy Oliver out, but he’ll settle for purchasing some stock for now. A little at a time until he owns Jordan Lines lock, stock, and barrel. Paula and Millicent also don’t know that Oliver is terminally ill with coronary thrombosis. He tries to hide it as much as possible, not that it’s really necessary, since his wife and daughter are too self-absorbed to notice. 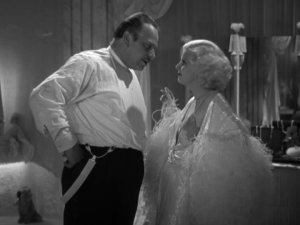 Of course, Dan and his wife, Kitty (Jean Harlow) are invited to dinner too. Millicent was reluctant to do it, because Dan is a loudmouth who’s always heard before he’s seen, and Kitty is the trophy wife he picked up at a dive club. Kitty is just as manipulative as Dan, and she’s got her own racket going–she calls the doctor pretending to be sick, but it’s really a booty call. Obviously they weren’t called that in 1933, but the concept hasn’t changed.

Oliver’s old friend, Carlotta (Marie Dressler) drops by to see him. She’s feeling the financial crunch as well. A former actress, Carlotta now runs with a fast crowd in Paris, and has come back to New York because a theater she owns has become a millstone around her neck. Carlotta is invited to dinner too, of course.

Oh, and that concert Paula said she was going to? Heh. The “concert” was a liason with has-been actor Larry Renault (John Barrymore), who she’s been keeping company with since Ernest went overseas a month ago. Now that he’s coming back, she’s all ready to drop Ernest in favor of Larry. He doesn’t feel the same way, because he’s forty-seven…ahem…forty, and Paula is nineteen. Rather fortuitously, Larry is invited to dinner as well.

Rounding out the table are Dr. Talbot (Edmund Lowe) and his wife. Talbot is a doctor to Manhattan’s society set and a serial cheater, Kitty Packer being one of his mistresses. Small world, isn’t it? His wife, Lucy (Karen Morley) knows about her husband’s dalliances, but she’s stayed with him because she loves him.

The day of the party dawns, and there’s a magnificent lion-shaped aspic waiting to impress the Ferncliffs. Everything seems perfect, and then things start going wrong. Millicent is beside herself, but like any society matron worth her Harry Winston tennis bracelet, she presses on. Dinner will happen by hook or by crook, and everything must go swimmingly. Everyone will have their own respective baggage in tow, but keeping up appearances is paramount.

John Barrymore plays himself in this movie. I felt like Dinner At Eight should have had a “Profile Counter” like they do on certain YouTube videos, because Barrymore’s famous angle is mentioned three times in the first third of the film alone. The other parallels between the two characters are plainly obvious. 1933 was when Barrymore’s decline became apparent. Just like Larry, Barrymore was drinking heavily and was long past his sell-by date as a leading man. Barrymore’s wild desperation shows in his eyes at several points thoughout the film, and it doesn’t seem to be merely acting. After Dinner At Eight, MGM released Barrymore from his contract. 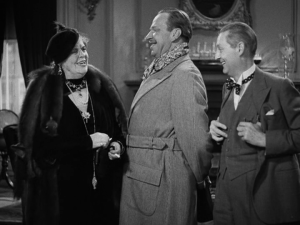 Meanwhile, Lionel was slowly and steadily building a robust career on the screen, just as he had on the stage. He is, by far, my favorite of all the Barrymores and one of my favorite actors in general–his versatility was amazing. In Dinner At Eight, Lionel’s Oliver is a quietly sensitive character whose worries have borne down on him to the point of exhaustion, and he wants nothing more than to see his wife and daughter taken care of. His part’s not nearly big enough in my opinion, but what’s there is gold.

The Barrymore brothers have no scenes together in Dinner At Eight, but it appears to be touch-and-go whether or not John would make it through. Spoiler alert: His tragic, washed-up actor commits suicide, which must have sweetened the deal as far as his agreeing to the part in the first place. Actors have long been famous for their love of playing death scenes. 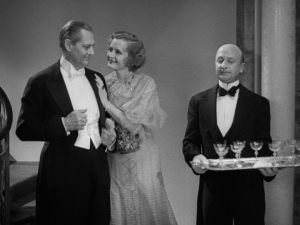 If I had to choose between Dinner At Eight and Grand Hotel, I would probably pick Grand Hotel. It’s a much fuller story, whereas Dinner At Eight feels a little haphazard and tangled. While it’s not terrible, Dinner feels like it’s less of a proper story arc and more of a race to the end. Still, it’s got a lot of classic moments and is a great relic of pre-Code Hollywood.

Et voilá–that wraps up my Day One. Crystal has more Barrymore for you at In the Good Old Days of Classic Hollywood, with Days Two and Three still to come. Thanks for reading, and hope to see you tomorrow when we look at another Barrymore film…

9 thoughts on “Dinner Is Served”