Long before MGM put his story on the screen, Florenz Ziegfeld was dipping his toe into Hollywood. The first film he produced was 1917’s The Land of Promise. Starring Billie Burke, the film is a straightforward story of farmers and romance. It’s also, unfortunately, lost. Other films were takeoffs of his stage shows, such as Rio Rita or Whoopee.

Only one of Ziegfeld’s films was a little bit of an approximation of the Follies, and that was the 1929 jaunt, Glorifying the American Girl. The film follows the ironically named Gloria (Mary Hughes), a Tin Pan Alley song plugger who is discovered at a country party when she dances with the entertainment,  Miller (Dan Healy). Miller, whose latest partner has just left him, invites her to join him on the road.

Gloria accepts, but she soon finds out why Miller’s been through so many partners: He’s kind of a jerk. Unfortunately, there’s nothing she can do about it because he’s somehow roped her into a five-year contract. On top of that, her boyfriend, Buddy (Edward Crandall) pledges his undying love to Barbara (Gloria Shea), Gloria’s former co-worker. It’s somehow all hunky-dory, though, because Gloria has just gotten a great job in the Follies and is on her way to becoming a big star. Barbara and Buddy watch joyfully from the audience as Gloria sings and fouettés her way through her first show. Of course, Gloria gets to wear one of those giant costumes.

There are a few Ziegfeld veterans in it as well, such as Helen Morgan, Rudy Vallee, and Eddie Cantor. The movie is choppy and wooden in a lot of spots, but it’s a good taste of what the Follies were like in their heyday.

Such shows had long been passé on Broadway and on the big screen when MGM planned for 1946’s Ziegfeld Follies. The film was both a coda for the Follies and MGM’s immortalizing of them. It had been fourteen years since Florenz Ziegfeld’s passing. The film was made at the end of the Second World War, and everyone had a sense that nothing would be the same ever again. Times had changed, tastes had changed.

The film is very aware of this. We see heavenly flashes of other great entertainers from history, Shakespeare and Barnum, and then Ziegfeld (played by William Powell again) appears, in his opulent bedroom in the Great Beyond, completely blissed out. Even though he has everything he could possibly want, Flo starts getting nostalgic. His mind flits over his first Follies in 1907, when New York’s elite came to see the new upstart producer’s efforts. Flo’s mind then wafts over the many veterans of his shows, like Marilyn Miller, Fanny Brice, and Will Rogers, his musings brought to life in stop-animation puppets. 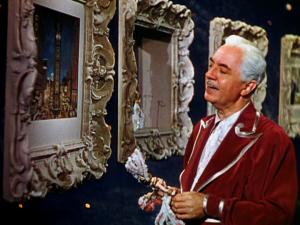 Then Ziegfeld really starts thinking and speculating about the talent that has arisen since the Follies. The wheels in his head turn, and he’s full of plans for “one last show.”

The Follies open with Ziegfeld’s old pal Fred Astaire singing “Here’s To the Ladies.” From there it’s a great big whirl of women in pink, some of them on horseback, as well as Lucille Ball wrangling about a dozen panther-women. We also see Cyd Charisse in her MGM debut, dancing en pointe in a pink tutu. 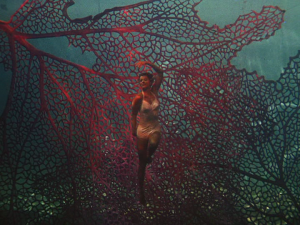 The film transitions into a pink-gowned Virginia O’Brien on her own (fake) horse, singing “Bring On the Wonderful Men.” It becomes obvious that not only do these Follies feature new performers, but it’s anything but a typical Ziegfeld show. For one thing, there are no stairs anywhere, at least not the showgirls-descending-from-heaven variety. For another, the film features acts Ziegfeld would have never dreamed of, but would have been all over if he could have, like a brief water ballet with Esther Williams. 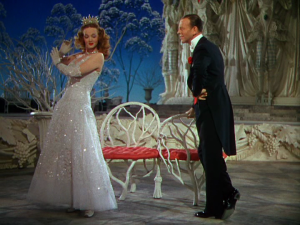 Fred Astaire is everywhere. Besides the opening, he dances the part of a high-class thief in “This Heart of Mine,” and a hapless Asian bystander in “Limehouse Blues.” The latter features Astaire wearing prosthetic eyelids, which I always find really strange and icky, but the number itself is very well-done. In both instances, Astaire dances with Lucille Bremer, who had starred with him in Yolanda And the Thief. Best of all, his last number in the film is a duet with Gene Kelly called “The Babbit and the Bromide,” a song Astaire originally performed with his sister, Adele in George Gershwin’s Funny Face:

The song is cute and fun the first time around, but the later version is sublime, because it’s real movie magic to see these two geniuses onscreen together. Here’s a snippet:

Fred isn’t the whole movie, however, although his frequent appearances aren’t unwelcome. Ziegfeld has plenty of comedy selections in it, such as one with Keenan Wynn about a guy who just wants to put a call in to Plaza Five-Five-Nine-Seven to talk to someone named Louie, but gets sent everywhere but where he wants to go. Ziegfeld alum Fanny Brice puts in an appearance in a substantial sketch with Hume Cronyn and William Frawley as half of a couple that wins a sweepstakes, but unfortunately have given their landlord the ticket.

Of course, there’s a ton of music. If anyone’s an opera fan, James Melton and Marion Bell sing a selection from “La Traviata” while dancing with champagne glasses that never spill. The film also bears the unmistakable stamp of Kay Thompson in “Love,” sung by Lena Horne, and Judy Garland’s “The Great Lady Has An Interview,” a winkingly funny parody of Greer Garson. Thompson’s style was the new swing for the postwar era–punchy and vigorous, with a hint of beebop thrown in. She was truly a unique voice in entertainment history.

Ziegfeld Follies is amazing on so many levels. It’s done very lavishly in the MGM style, which was unusual for the end of the Second World War. Shortages were rampant, so conservation was the thing, and the studios were primarily shooting in black-and-white. These Follies are all color, all the time.

More numbers were shot than remain in the final production, and many more were conceived but never shot. Mickey Rooney and Judy Garland were originally supposed to do a parody of their teenage movie romances, for example, but when Mickey entered the service in 1944, there went that idea. The film was mostly shot in 1945, and wasn’t released until 1946 because it needed extensive retakes. The first preview audience was overwhelmed with the scope and length of the original film, so tweaks were necessary. Ziegfeld had a massive budget of 3.4 million dollars, and while it did well at the box office and with the critics on its release, the film’s cost made it a loss for the studio.

Even an innovator like Florenz Ziegfeld wasn’t immune to the passage of time, and anyone would be hard-pressed to find a better send-off than what MGM gave him in Ziegfeld Follies. While it’s atypical, it’s a good possibility that Ziegfeld would have been pleased.

That concludes our look at Ziegfeld films, and there’s more Broadway for you on Day Three. Thanks for reading, everyone!

Glorifying the American Girl and Ziegfeld Follies are both available on Amazon.