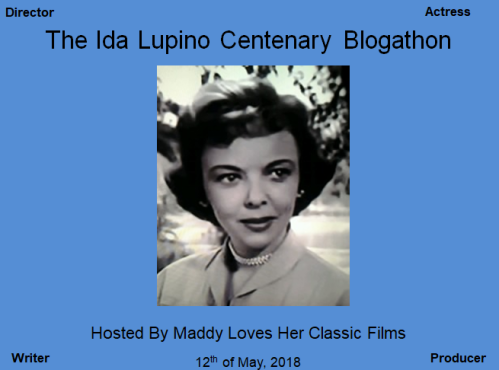 This seems to be the weekend for hairpin plots. Yesterday’s movie started with newsreel cameras and ended with a South American rescue. Today, well, you’ll see…

I’ve reviewed 1940’s They Drive By Night before when my blog was a newborn, but it was such a short take that I have no problem revisiting it (Read my older review here). At the time, I didn’t care much for the film because the plot seemed very herky-jerky. Will my opinion stay the same two years on? We shall see.

They Drive By Night opens with…brothers Paul (Humphrey Bogart) and Joe Fabrini (George Raft) driving a truck. They’re hauling apples on this trip, and the way is tough. Not only are the hours long and the drive hazardous, but their employer, Mike (Charles C. Wilson) hasn’t paid them since they can’t remember when, and he owes the Fabrinis three hundred dollars.

The truck gets a busted wheel, so Joe hitches a ride to Barney’s Roadside Restaurant, where he puts a call in to Mike asking for their pay. Mike does much less than that. He not only sends the loan agent, Farnsworth (Charles Halton) to collect money they owe him for their truck, but a replacement driver to get the haul in. Before that happens, however, Joe has time to exchange pleasantries with the waitress, Cassie (Ann Sheridan). She’s not impressed. 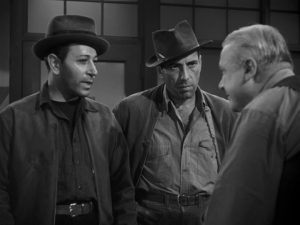 The truck driving crowd have each other’s backs. They sound the alarm when Farnsworth is lurking about, and relish throwing him out on his ear. They also give each other help when needed. Everywhere they go, from diners to gas stations, they know everyone.

On the way back to Los Angeles, they pick up Cassie, who quit her job at Barney’s because Barney got a little too handsy. She doesn’t mind a bit that the Fabrinis are on their way to LA, and after dropping Paul off at his house, Joe and Cassie head on down the road. It goes without saying that Joe and Cassie are quite taken with each other.

Even though Joe and Paul managed to get back, Mike still won’t pay up. So the Fabrinis deck him and take the money out in petty cash, right after they quit. 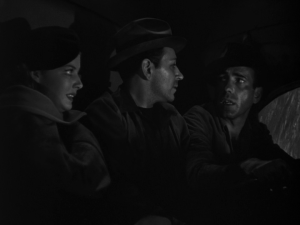 Then the Fabrini brothers’ fortunes begin to change. They unload a shipment of lemons for $580, which is nothing to sneeze at, because in today’s money it would be $10,342.65. They’re able to pay off their truck, and literally scare Farnsworth away.

One of the biggest hazards of driving truck is falling asleep at the wheel. Paul and Joe leave with another haul barely a day after getting home, and while Joe slept like a top the night before, Paul hardly shut his eyes. On the way back from dropping off their cargo, Paul is driving, and he nods off, causing the truck to go off the road, wrecking it. Paul and Joe are all right, except that Paul loses an arm. 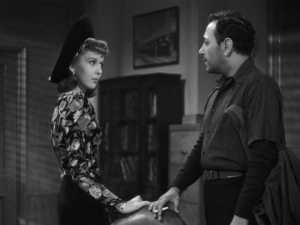 With Paul sidelined, Joe gets a job working for his friend, Ed Carlsen (Alan Hale) as garage manager. The boss’s wife, Lana (Ida Lupino) put in a good word for him, and not because she’s a sweet, loving person, either. Nope. She wants Joe, and she wants him bad.

Joe tries to put Lana in her place, though: “You know what’s going to happen to you? One of these days, Ed’s going to catch you, and when he does, he’s going to slap your ears off.”

Lana doesn’t care. From this point on, it’s her movie. At least, that’s what she wants us to think. She hates Ed, and wants nothing more than to be rid of him. Joe’s continual rebuffs get on her conceited little nerves, but she doesn’t understand Joe won’t date her because he’s in love with Cassie and Ed’s his friend. Not to mention, Lana’s, um, scary. 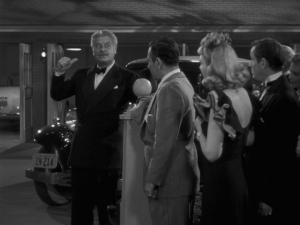 Ed and Lana live in an opulent mansion, complete with ultra-modern garage doors. Seriously, Ed’s super proud of these doors, because they open by electric eye. He’ll show them off to guests at the drop of a hat. Lana hates the doors almost as much as she hates Ed.

One night, Ed gets completely plastered after a wild party and clubbing, so Lana drives him home. As they pull into the driveway and the electric eye doors yawn open, a thought occurs to Lana. She leaves the car running and Ed sleeping in the front seat while she casually walks into the house. The doors close silently behind her, and just like that, Lana is a widow. 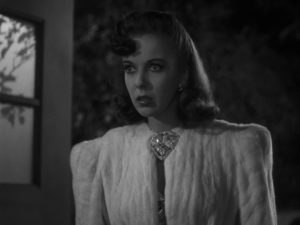 Like any closeted cold-blooded killer, Lana dons widow’s weeds and sobs to the District Attorney about her husband’s untimely death. She also doesn’t waste any time offering her husband’s position to Joe, which he accepts, with the proviso that she stay out of the way.

Except she doesn’t. One day, Lana stops by the company to show off her new, ultra-fashionable suit. Joe is polite, firm, and in love with Cassie, which he reminds Lana of just as Cassie herself shows up. Lana suddenly has a headache, and so Joe and Cassie drive her home. 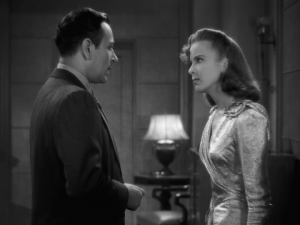 And herein lies Lana’s big weakness: The doors.  When Joe and Cassie try to put Lana’s car in the garage, Lana suddenly gets as nervous as a cornered tiger. She makes them stop the car and runs into the house in terror.

Knowing that she can’t seduce Joe, Lana now goes for the full-on intimidation angle. She accuses Joe of making her kill Ed, and even runs to the district attorney with her new story. Only it backfires: Joe is arrested and put on trial, but so is Lana for being an alleged accessory to first-degree murder. 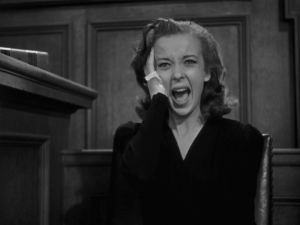 Unfortunately for Lana, though, there are electric eye doors everywhere she goes, and she can’t escape her fate.

Keep in mind, Lana’s subplot happens all within the last half-hour or so of They Drive By Night. Therefore, the arc can be summed up this way: “Truck driving brothers face the hardships of the road, then find their fortunes looking up. And oh yeah, the boss’s wife is a triggered, raving murderer.”

Ida Lupino’s performance is intense. We’ve all heard about Bette Davis’s eyes, but Bette Davis would have had nothing on Ida Lupino in this film. There’s one scene especially when she really goes bonkers, and it’s so freaky that it’s a wonder the other actors aren’t cowering. I would say They Drive By Night would have been better if they had focused on the murder and company intrigue angle more, but that much Lana might have been way too heavy. 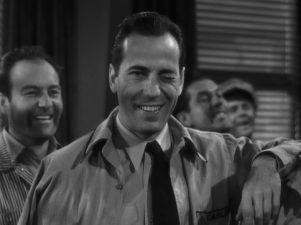 How does it all end? Well, let’s put it thusly: Any film that winds up with characters winking at the camera just feels weird to me, even if the finish is a happy one. In a movie as mishmash-y as They Drive By Night, it’s just the cherry on the top of the oddity sundae. That’s not to say the movie is completely terrible, though. I did like it better this time, but that’s because I knew what to expect.

That does it for my part in the Ida Lupino Blogathon. There’s more Ida to be found at Maddy Loves Her Classic Movies. Thanks, Maddy, for hosting, and thanks for reading, everyone! See you on Wednesday for National Classic Movie Day. 🙂

Available on DVD from Amazon.

10 thoughts on “The Doors Made Me Do It”