In this age of ubiquitous digital media, it’s always interesting to look back at a time when broadcasting was newer, cruder, and a much, much bigger deal. 1941’s The Great American Broadcast is a film that does just that.

The film opens at an airport in 1919, where pilot Rix Martin (John Payne) taxis his biplane in. He’s hopping mad because a telephone company is installing poles right on the runway of his airport, which is an obvious hazard, and he starts duking it out with the employees. Four against one, but who’s counting? Fortunately, the electrician doing the actual installation is a decent sort, and climbs down to lend a hand. 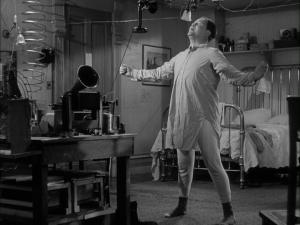 Rix knows his airport is bust, so he goes home with the electrician, Chuck (Jack Oakie) who shows him a new radio transmitter he’s set up in his apartment. It’s so crude he has a candlestick phone jury-rigged as a microphone, and he takes Rix over to his girlfriend’s apartment, where he’s got the receiver. Rix puts the headphones on, and Chuck launches into a spirited rendition of “Give My Regards To Broadway,” followed by the vigorous “Shooting of Dan McGrew.”

Rix is absorbed in Chuck’s performance so deeply that he doesn’t notice when Chuck’s girlfriend, Vicki Adams (Alice Faye) come home. She doesn’t notice him either until she’s changing her clothes. No surprise, finding a strange guy in her apartment freaks her out, but it would probably be a lot more awkward if Rix wasn’t all jazzed about what he’s just heard. Radio is the wave of the future, and he wants to get in on the ground floor.

Rix, Chuck, and Vicki cook up a broadcast for the New Jersey area, and with some financial help from Rix’s friend, Bruce (Cesar Romero), they’re ready to go. It’s a dark and stormy night, and they send from a billowy, leaky tent. Their radio transmitter overheats constantly and has to be fanned every few minutes, but they still put out a decent variety show in front of a live audience, with opera, an orchestra, and Vicki as the featured vocalist for the pop songs. Everyone gamely gives out, even with rain water dripping in their faces.

Since their first foray is basically a fail, Rix thinks of another angle, and what better way to get people to invest in radio than a sporting event? The big fight between Jack Dempsey and Jess Willard is coming up, and it promises to be a nailbiter.

Radio isn’t the only thing that’s afoot, though. Chuck has this idea that he and Vicki are going to get married, but she doesn’t agree. Not only is she not that into Chuck to begin with, but she and Rix have fallen in love. Chuck accepts this eventually, although his initial reaction is to punch Rix in the face.

Sure enough, broadcasting the fight comes off like gangbusters (See the footage of the real fight here), and Rix and Vicki are rocketed into the new world of broadcasting. Radio transmitters start popping up all over the United States, and people are buying radios like crazy. They don’t come cheap, either–one store sells them for $100, or $1,502.22 in 2018 money.

Rix and Vicki find time to get married in Connecticut, and radio is such a part of their life that even their wedding is interrupted when the son of the Justice of the Peace rushes in to tell him they got a signal from Buffalo. 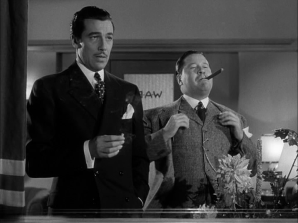 Unfortunately, Rix’s old pal, Bruce has gotten into broadcasting as well, buying up the WAB network and sending glitzy shows over the airwaves. Chuck is his right-hand man, and they’re seen puffing on various tobacco products while a trio warbles their way through a Chapman’s Cheerful Cheese commercial. Meanwhile, Rix needs capital to modernize his equipment to try and stay competitive.

Bruce asks Vicki to lunch and attempts to poach her for WAB, but it’s a no-go, because Vicki is loyal to Rix. She would rather Bruce become their backer, though, as long as he keeps it a secret. Vicki doesn’t even want him to know Bruce called her because Rix has a lot of pride. 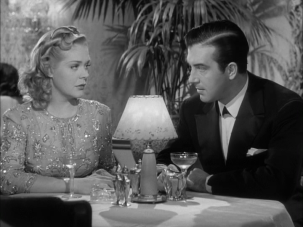 Later on, Rix comes home from the bank elated because he thinks a $40,000 loan just came through. He and Vicki go out on the town to celebrate, and the first club they go to gets very awkward when Bruce and Chuck show up. Just as they’re about to leave, Bruce lurches up to the table and tries to ask Vicki for a dance. Rix punches him, and as they storm out, Chuck tells Rix about Bruce putting up the money he needs.

Rix is incensed, storming out on Vicki and becoming a wanderer. Vicki thinks he’s working in South America and desperately tries to contact him, only to have her letters come back “refused.” She goes to work for Bruce, becoming a huge star at WAB, but she can never quite give up on Rix.

Eventually, though, Vicki does begin to despair, and the question is whether or not things will turn around before she makes a big mistake.

And how much Rix will drag his feet before coming to his senses. I don’t know what it is with John Payne and Fox musicals, but for some reason his characters are always reluctant to check their pride until the very last second. This makes three films I’ve seen so far where this has happened. It’s hard not to like Payne’s pouty-face, though.

The rest of the cast is fantastic, too. I’ve always been a fan of Alice Faye; she seemed down-to-earth and sweet. She and her costars play off each other very well. Film historians have said she was always able to portray desirable characters without being smutty, and in Broadcast she’s almost a firebrand.

Another highlight for me was Jack Oakie. He was a big performer, not as far as size goes, but because he was a vaudevillian and the prevailing philosophy there was “Go big or go home.” Amazingly enough, Oakie was also functionally deaf and had to read lips, so he had to be loud in order to hear himself.

With its dark and stormy male lead, The Great American Broadcast seems like a downer, but it really isn’t. The music is terrific, the variety acts are hilarious, and it’s a very interesting look at early, early radio.

All right, thanks for reading, and come back tomorrow, when I’ll be posting something for Maddy and Ruth’s Lon Chaney Blogathon!

This film is available to own on DVD from Amazon.

One thought on “Radio Days”