William Holden worked with Billy Wilder five times, whether Wilder was directing or writing, and one of the most classic is the 1954 film, Sabrina. Costarring Audrey Hepburn and Humphrey Bogart, the film is a sweet, graceful story with a healthy amount of Wilder’s trademark bite.

There’s a garage with eight immaculate vehicles, and above it lives the chauffeur, Thomas Fairchild (John Williams) and his daughter, Sabrina (Audrey Hepburn). Sabrina is hopelessly in love with the Larrabee’s younger son, David, (William Holden) and whenever there’s a party on the terrace, she’s up in a tree watching the goings-on.

Meanwhile, David is the proverbial playboy, living it up in any way he can. He’s been kicked out of a plethora of schools. He’s also a lothario who steals away to the indoor tennis court with attractive females and a bottle of champagne. Technically David has a job at Larrabee Industries, but he doesn’t show. He distinguishes himself on the polo ground, but other than that, he’s a flake. In sharpest contrast, his older brother, Linus (Humphrey Bogart) is a workaholic. David wears straw hats; Linus wears Hamburgs. David has been married several times; Linus is married to managing the Larrabee empire. David is so idle that Linus claims David as a deductible on his tax return.

In an attempt to help Sabrina get over David, her father sends her to cooking school in Paris. Sabrina is despondent over leaving David, and tries to commit suicide by inhaling carbon monoxide. Linus finds her before she feels any effects, and Sabrina bluffs out something out about missing spark plugs.

At cooking school, Sabrina is still awkward and not exactly at the top of her class. She can’t crack an egg, and her souffle falls because she forgets to turn on the oven. She keeps blundering her way through until she meets the Baron St. Fontanel, who is already a competent cook but looking to refine his skills. He takes Sabrina under his wing and becomes a dear friend, escorting her around Paris and going with her to plays and art galleries. Two years later, she’s graduated and on her way home. “If you have any trouble recognizing your daughter,” she writes her father just before leaving Paris, “just look for the most sophisticated woman at the Glencove station.”

Sabrina’s dad probably would have had an easier time recognizing her than David, who drives by the station at his usual breakneck speed, only to screech to a halt when he sees her. Naturally, he offers Sabrina a ride, who slyly keeps him guessing as to her identity. It’s not until they pull into the Larrabee driveway that David finally gets it, and he’s enchanted.

David wastes no time inviting Sabrina to the party the Larrabees are giving that night, only there’s a slight hiccup in the proceedings–his fiancee is there as well. Yep, he’s engaged to Elizabeth Tyson (Martha Hyer), in what is, for all intents and purposes, a merger. She’s the heiress to a sugar empire, and the Larrabees are trying to develop a special plastic made out of sugar.

Being an enterprising fellow, David whirls Elizabeth over to someone holding a champagne flute, and a little strategic jostling sends his betrothed inside to clean up. David seizes the opportunity to bound over to Sabrina and lead her to the dance floor. The chemistry between them is palpable, and they keep dancing even after the band has stopped playing.

David is all set to include Sabrina in his usual routine of having champagne at the indoor tennis court, when his father and Linus confront him about Sabrina. In the process of defending himself, David sits down on the champagne glasses he’s stowed in his back pockets. Instead of wooing Sabrina, he’s in the very undignified position of having glass shards pulled out of his gluteus maximus. Linus goes and finds the disappointed and confused Sabrina to let her know David won’t be coming.

Since he’s incapacitated, David asks Linus to date up Sabrina for him. Linus obliges, but it’s not as simple as merely keeping Sabrina occupied. It never is, of course, and it doesn’t take long for David to get jealous. Very few things motivate healing like the feeling of impending competition. 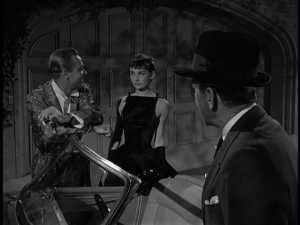 Sabrina is definitely Audrey Hepburn’s movie, but William Holden plays the role of the playboy superbly. He’s quick with the cheese-eating grin, and whizzes around in his snazzy Nash-Healey sports car like someone who literally doesn’t have a care in the world.

In spite of his good turn in the role, there were some critics who thought Holden should have played Linus instead, with another actor as David. They also thought Bogart was miscast. Who knows, switching the parts out may have been better for the film, as Bogart apparently wanted Lauren Bacall to play Sabrina instead of Hepburn. Some film historians have claimed Bogart was difficult on the set as well. Hepburn’s son, Sean Ferrer, once asked Hepburn about it, and her answer was that she and Bogart had gotten along okay, but Bogart must have had his reasons for not caring for Hepburn’s acting. 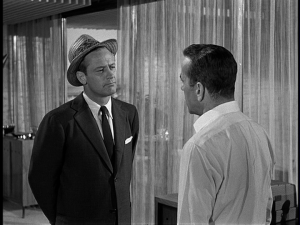 Gettng back to Holden, though, his character’s dalliances may have been a case of art imitating life, as it was well-known in Hollywood that Holden, though married, really liked the ladies. In fact, he and Audrey Hepburn fell in love during the making of the film, so the passion seen onscreen is the real thing. However, what drove them apart was differing priorities. Hepburn wanted children, but Holden had already had a vasectomy in order to cover up any indiscretions. So, that was that.

Troubles aside, Sabrina remains a charming film, and the doomed chemistry of Hepburn and Holden is really something to see.

For more of our Golden Boy, please visit The Wonderful World of Cinema, The Flapper Dame, and Love Letters To Old Hollywood. Thanks for reading, everyone, and as usual, until next time…