My dad used to rent a lot of westerns when I was growing up, and I remember I felt pretty blah about them after a while. Westerns can be like sci-fi in that they have their own archetype. There are gallops on horseback, shootouts (at high noon or otherwise), peppery women, saloons with honky-tonk music and freely flowing hard liquor. Still, there are quite a few films that stand out from the rest, and one of them is John Ford’s 1962 movie, The Man Who Shot Liberty Valance.

The film opens with a passenger train pulling into the town of Shinbone. An older couple, Senator Ransom Stoddard (James Stewart) and his wife, Hallie (Vera Miles) get off, and are met by the former marshal, Link Appleyard (Andy Devine) and two newspaper men, who desperately want to know why the senator and his wife are in town. Seriously, they’re hungry for news. While Hallie is out driving with Link, the Senator visits with the journalists, and the Senator ends up talking their ears off about politics. Meanwhile, Hallie and Link are driving out in the desert, and they come upon a burned-out tank house. Hallie is delighted to see cactus roses growing all over the former porch area.

When they get back to town, the Senator gets up to meet his wife and Link, and mentions he’s in town for the funeral of Tom Doniphan before making for the door. 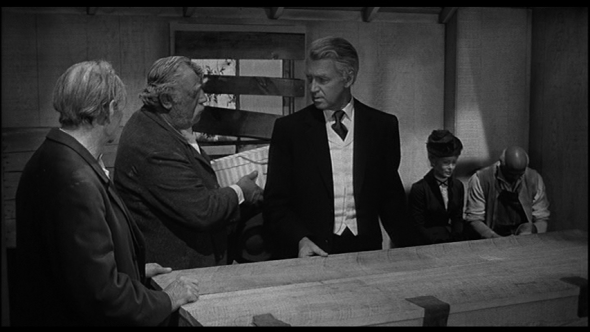 At the undertaker’s, the Senator and Hallie go to the back room where Tom’s coffin lies in state. Sitting off to the side is Pompey (Woody Strode), Tom’s right-hand man, whose face is contorted with grief. Hallie and the Senator greet him warmly before sitting down next to him. The Senator has some advice for the undertaker about Tom’s body: “Put his boots on, Clute. And his gun belt. And his spurs.”

They’re not alone in there for long before the journalists catch up with them, and the Senator finally consents to telling his story. Ransom Stoddard was a young lawyer just out of law school when he took the stagecoach to Shinbone. On the way they get held up by a trio of robbers, one of whom beats Ransom with the butt of his whip, and he keeps beating him until his two toadies pull him away.

Ransom wakes up on a couch in the kitchen of the local restaurant. He’s been brought into town by Tom Doniphan (John Wayne), who’s an unofficial lawman. The town marshal, Link, wants nothing to do with actually enforcing the law, as if there’s any real law to speak of in a place like Shinbone. It’s still a territory, and vigilantism is the order of the day.

Tom knows who jumped the stagecoach and whipped Ransom–the infamous Liberty Valance (Lee Marvin). Ransom is determined to put Liberty in jail, but Tom tells him he needs to start packing a firearm, or else get out of town.

Our upstart lawyer is determined to stay and determined to stay gun-free. Regarding the former, he succeeds, but not so much the latter, and even he has to concede that having a gun is necessary. The newspaper man, Mr. Peabody, gives him an old pistol of his, and Ranse goes out to practice twice a week. Only problem is, he doesn’t know how to use a firearm, so Tom gives him a few pointers, and helps him out with target practice. Ransom is a tough guy, but he’s a wee bit city helpless. He resents that Tom knows how to handle himself, whereas Ransom mostly relies on pure rage.

As far as his occupation goes, Ransom hits the ground running. He’s not able to practice law on a regular basis, so he works in the restaurant and opens a school in a little room off the newspaper office. Plenty of people in town want to learn how to read and write, which means the place is crammed with folks of all ages every time the bell rings. Some of them show up out of curiosity, others because they’ve lost a bet, but in the end they eat up all the information they’re getting.

Trouble’s brewing, however, and it inevitably bubbles to the surface. Shinbone’s in a territory that is on its way to become a state, but certain people are determined to work against it. And yep, it’s our old pal, Liberty Valance. I feel like this guy needed something like the Darth Vader theme playing whenever he strode into a scene. Valance is not only an outlaw, but a spoiled brat, and he knows statehood means an end to his pillaging and murdering. Welp, dude, that’s called progress.

There’s trouble of another kind, too. Hallie has always been Tom’s girl, but since Ransom has come to town, she sees a different way of life opening up to her, one which includes education and culture. Tom loves Hallie, but he has to admit that Ransom can offer her more in the long run. The triangle is symbolic of Shinbone’s trajectory as a town and a territory; it’s a tug-of-war between the old and new orders. The big question is, will these two factions ever learn to work together? 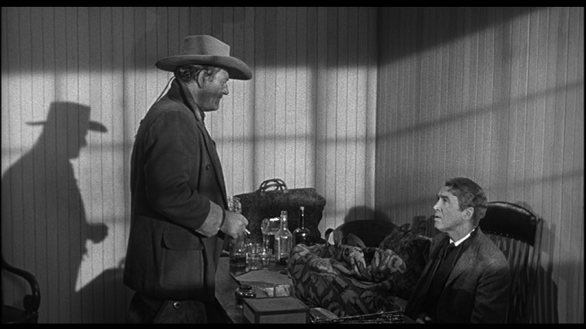 I’m not going to answer that question, because it’s too big of a spoiler, but I will say this: Tom and Ransom each find their footing in their own way, and they each come to value the other for what they offer. However, one of them will always be in the other’s shadow in some fashion, and there’s nothing they can do about it.

Personally, I would have enjoyed seeing more interplay between John Wayne and James Stewart. It’s always fun to see opposites questioning each other’s modus operandi. In the original story, the dynamic between Tom and Ransom was that of a mentor and protegé. The film downplays this, which gives the story more mystery, but the relationship could have definitely stood further development.

The Man Who Shot Liberty Valance is an excellent film, and intriguing as all get-out. It’s also one of John Ford’s weakest movies from a technical and artistic standpoint. It’s said that by this point in his career, Ford lost interest in filmmaking, and had turned abusive on the set. Everyone was on the receiving end of his vitriol, lead actors and otherwise.

It made for a miserable experience, and it was plain that Ford was winding down. He was always a notorious detail man, as well as someone who edited through the camera, and Valance was no different, but Ford’s attitude soured things. What was also unusual for Ford is that Valance was filmed at Paramount Studios instead of on location, which gives the movie a slightly phoned-in look.

Even when phoning it in, Ford could still bring it–The Man Who Shot Liberty Valance holds up well. It keeps the viewer thinking and asking questions, and it has a lot of classic elements. There’s nothing blah about it, even for those who aren’t into westerns.

For more of the Great Western Blogathon, please see Catherine at Thoughts All Sorts. Thanks for reading, and see you tomorrow for our third blogathon of the weekend…