And now for that surprise blogathon I told you about…

San Francisco is a town of extremes. Even in its earlier days, it had both upstanding citizens and degenerates, plus everyone in between, and it wasn’t always in relation to one’s station in life. It is the city Emperor Norton called home, after all. The 1936 film, San Francisco explores some Edwardian-era morality and social structure of a notorious city, with an equally notorious disaster looming in the background. Jeanette MacDonald plays Mary Blake, a pastor’s daughter from Colorado, and is our conduit into a heady, intense time.

It’s December 31, 1905, and the clock has just struck midnight. The entire city is celebrating, and there’s champagne in every fountain. Blackie Norton (Clark Gable) is walking down the street in white tie, and he seems to know everyone. The festive mood is broken, however, when a fire truck races by on the way to the Barbary Coast. Blackie is afraid it’s his nightclub, the Paradise, but it turns out to be an aparment building called the Bristol.

Blackie goes on to the Paradise, where his chorus girls are ringing in 1906, and he’s barely arrived when Mary Blake (Jeanette MacDonald) comes looking for a job. Blackie doesn’t need much convincing after hearing Mary sing and seeing her legs. Mary complies, even though she’s aghast.

While the Paradise is a new and exciting world for Mary, what she really loves is opera. On her first night performing, the club gets a visit from arts patron Jack Burley (Jack Holt) and Signor Baldini (William Ricciardi), and Mary sings “A Heart That’s Free” for them. It’s an unusual selection for the raucous Paradise, but the Signore is enchanted. He and Jack offer Mary a chance to sing at the Tivoli, but Blackie reminds them of Mary’s contract with the Paradise.

Mary becomes acquainted with Blackie’s oldest friend, Father Tim Mullen (Spencer Tracy). Both guys came from working-class backgrounds, but as they grew up they went in different directions. Blackie thinks religion is hocus-pocus, while Tim studied for the priesthood. In spite of their differences, the two have kept up their friendship. He clues Mary in to some key details about his longtime friend: 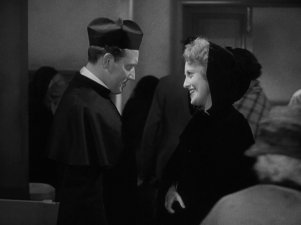 “He’s as ashamed of his good deeds as most people are of their bad ones. No one in the world will be able to make me believe there isn’t a whole lot more good than evil in Blackie Norton.”

Since Tim knows Blackie better than anyone, good side and not-so-good, and he can see that Mary is a pure soul, he sets out to protect Mary from the coarser parts of Blackie’s nature. Mary herself seems afraid of getting sucked in. She gets nervous when Blackie puts his arm around her, and even though she finds herself drawn to Blackie, knows that he wants something other than what she’s willing to give.

Mary ends up singing at the Tivoli after all, and makes a big success as Marguerite in Gounod’s Faust. She got along in burlesque, but opera and art songs are where she really shines, because the music suits her. She lightly trips over the notes and intervals with both delicacy and power. 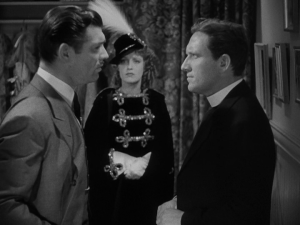 Even though the Tivoli is where she’s supposed to be musically, Mary goes back to Blackie after he comes to see her in her dressing room on opening night. Except…she doesn’t stay with him. Father Tim shows up at the Paradise to find Blackie ready to display Mary in a skimpy costume to a reckless mob, and Blackie punches Tim for trying to stop him.

This is the last straw for Mary, who leaves with Father Tim and goes back to the Tivoli, where she becomes engaged to Jack, the guy who is supposedly one of the good ones, but might not be so. Let’s put it this way: Blackie isn’t the only one who knows everyone in San Francisco.

Mary’s tug-of-war goes on for most of the movie, and it’s a little exhausting, but there’s a reason for it. Everything is leading up to the infamous earthquake, which happened in the very early morning hours of April 13th, and things that seem important are no longer so.

Clark Gable and Jeanette MacDonald were a rather odd pairing. Their characters were kind of an odd pairing as well–she was the preacher’s daughter and he was the classic bad boy with a heart. I can understand the attraction, because most women go through a bad boy phase at some point, but Blackie and Mary had different value systems, even if Blackie has a niceness streak. Being with him requires checking at least some gentility at the door–when Blackie invites Mary up to his apartment, it’s because he’s hoping to get some. He’s done it before. Mary knows it, but she still ping pongs between being with Blackie or not. Mary is beautiful and talented, but she also seems wishy-washy.

At least, that’s what I thought when I first saw San Francisco.

Since then, I’ve come to realize that Mary has to not only figure out what she really wants, but she’s also operating according the mindset of 1906. Jack is the guy she should want, because he’s upper crust, supports opera and seems respectable, “seems” being the operative word. On the other hand, she’s drawn to Blackie because she keeps hoping his good guy side will move to the forefront, as opposed to what’s there, which is Blackie as a purveyor of the lowbrow and bawdy.

Mary is a product of the early twentieth century. The Edwardian period was a flaky time as far as morality was concerned. It came on the heels of the Victorian era, where on a societal level, virtue was celebrated and desired. Victoria was faithful to her husband to a fault, even after he died, and until her own death would have Albert’s clothes laid out every morning.

Contrast that with her son, Edward VII, who had many mistresses, and society took their cues from him. Well, the upper classes did. It was so common for married people to have paramours that every bedroom had its own label on the door to keep illicit lovers from sneaking into the wrong boudoir. No one said anything, and no one cared, none that we know of, anyway. Marriages were often for convenience, so there was literally no love lost in most of these cases. Not that that makes it OK, but that’s what people did.

For the lower classes, the strict moral code still applied. They were supposed to hold to virtue and be faithful to their spouses, while viewing the rich as being like royalty. In the eyes of the poor and middle classes, the rich were also supposed to be decent and almost god-like, but if they weren’t, it wasn’t the underlings’ place to comment. In San Francisco, Mary reflects this mindset when she remarks to Jack’s mother, Mrs. Burley about Nob Hill people being the aristrocracy of San Francisco. Mrs. Burley shows her the house next door, where a party has been romping along for two days and nights. “Worst house on the street,” she tells Mary.

Class differences in the early twentieth century definitely weren’t cut and dry. Events such as the 1906 earthquake had a way of tearing down boundaries, or at the very least, showing up their deficiencies. San Francisco effectively sums up some of what was beneath the surface of the Edwardian era, and it’s a fine movie on other levels. Jeanette MacDonald puts in a beautiful performance as well.

For more of the Singing Sweethearts Blogathon, please see the Pure Entertainment Preservation Society. See you on Friday, people, when we have our first official Shamedown. Thanks for reading!