OK, all–confession time: up until Ruth and Kristina announced this blogathon, I had no idea that Ann Rutherford was Canadian. I’ve watched her films for years, so I don’t know how I missed that important detail, but it’s true. Rutherford was born in Vancouver, British Columbia a hundred years ago as of November 2, 2017, and to say this woman led a busy life is an understatement.

I think the reason I never knew Ann Rutherford was Canadian was that she was so versatile I never thought about it. She did comedies, romances, mysteries, period films, and even the occasional musical, although she wasn’t a singer. Ann never failed to make an impression, no matter how small her part was.

Therese Ann Rutherford moved to San Francisco with her family as a baby, and after her parents split, to Los Angeles with her mother and sister. She made her stage debut in 1925, and in radio in 1935 or so. Ann decided to pursue acting as a career because she figured it was preferable to going to school, plus she was mad at her English teacher for nitpicking her. Her dad had been a professional opera singer and her mom was a silent screen actress, so performance wasn’t exactly foreign to her, but she still fabricated her resume when she applied for her first radio job.

Ann first began her movie career at Republic Pictures, making her debut in 1934’s Student Tour. She really didn’t get noticed by the public until signing with MGM and filming 1937’s You’re Only Young Once, the first film in which she was Andy Hardy’s girlfriend, Polly Benedict.

While she very seldom played anything but supporting or ensemble roles, Ann did very well for herself, and she seemed to be smart about her money. In 1943, she bought a mansion in Beverly Hills, which she lived in for sixty-nine years (This house, incidentally, was put up for sale in 2017). She also married Richard May in 1942, and had a daughter, Gloria May.

Although Ann was an immensely popular actress, as yet there has never been a book-length biography about her, so other known details about her life are few and far between, apart from what she’s told us. Ann liked it that way, though:

It’s titillating to do an occasional film, but really, I don’t need it. Oh, I suppose, if you were a Helen Hayes, it might mean something if you left the business. You’d be depriving the show world of something. I’m depriving that world of nothing.

I don’t know if I completely agree with Ann on this point, because the films that she made would not have been the same without her. Here’s a small sample of her eighty-one credits.

Ann’s turn as Andy’s on-again, off-again love interest, Polly Benedict is one of her best-known roles, and she loved the part immensely. She was in fifteen of the seventeen films in the series, and as time passed, was more and more on the periphery. It’s only natural, since the characters had to grow up and move on. I don’t know about anyone else, but I have a kind of love-hate view of Polly. While she’s a good match-up for Andy, she does manipulate him rather shamelessly on occasion, such as in Andy Hardy’s Double Life. However, the series would have had less of a bite without her.

In a blonde wig and trailing white gown, Ann is almost unrecognizable as the Ghost of Christmas Past. This must have been freeing for her, as it allowed Ann to play a different type of character–she’s luminous and ethreal in the part, gracefully conducting Scrooge over his happy but forgotten boyhood.

One of the few musicals Ann made, the film was more of a vehicle for Lana Turner. When the wifely half of a famous dancing couple turns up pregnant, they put out a call to universities for a replacement, only there’s a catch. The couple sends Patty, a pre-selected ringer to one of these schools to make things look legit, and Ann plays Patty’s agent’s secretary and friend. 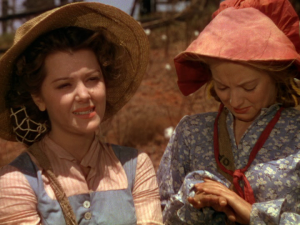 Ann played Carreen, Scarlett’s younger sister. While Ann was twenty-one at the time, Carreen was thirteen when the film opens, and she goes from an eager young girl to a brave but passed-over young woman. I only wish her character had been a wee bit more fleshed-out. In the book, Carreen falls in love with Brent Tarleton, and after he’s killed in the war, decides to enter a convent. It wouldn’t have been a big deal to include those details, even offhandedly, and it might have been preferable to Carreen watching Suellen crying about being an old maid. Ann didn’t care that her role was small, though–she wouldn’t have minded playing a gatepost if it meant being part of Gone With the Wind. Later in her life, Ann would frequently attend events and retrospectives related to “Wind,” as she called it, and considered the story a friend.

Ann plays Lydia, the silly Bennett sister who runs off with that scoundrel, Wickham. She had a wonderful time making this film, and her only regret was that it wasn’t in color. MGM had planned on shooting it in Technicolor, but only a limited amount of that type of film was manufactured each year back then, and it all went to Gone With the Wind and The Wizard of Oz. Oh well. The film is a classic and well-worth experiencing.

Based on James Thurber’s excellent short story, Mitty follows Danny Kaye as the title character, who escapes into fantasy whenever he can. Ann plays Gertrude Griswold, Mitty’s nagging fiancee, and she’s good at annoying him, but the movie focuses much more on Kaye. This was one of Ann’s last big films before she retired from movie-making.

In 1953, Ann divorced Richard May, married producer William Dozier and went off to live happily ever after. She did make a couple more films and a few guest appearances on TV, such as The Bob Newhart Show, but was mainly a wife and mother, raising her daughter and stepdaughters. She never quite left movies behind, though–Ann was always ready to talk about her experiences during the studio era, giving interviews and making personal appearances. In my opinion, one of the nicest was when she had lunch with Huell Howser and Anne Jeffreys:

Ann Rutherford died in 2012 at the ripe old age of 94, but she left behind a wealth of fun films and plenty of stories about a time long past. Film historians have her to thank for a lot of what they know about older Hollywood.

That wraps up my Day Two of the “O, Canada Blogathon,” and tomorrow we’ll visit with another famous Canuck. Until then, Kristina and Ruth have lots more waiting for you at Speakeasy and Silver Screenings. Thanks for reading, and see you tomorrow!

12 thoughts on “All About Ann Rutherford”