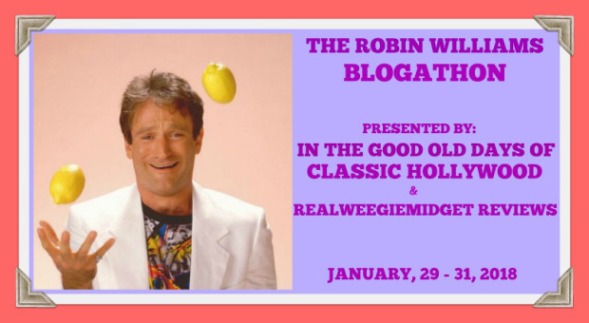 Robin Williams is a loved fella. For my part, I was a big Mork and Mindy fan as a very young child. At least as much as Mom and Dad would let me, anyway, but I did have the suspenders. Oh, yes. I wore those things as often as I could. I remember when Williams made a spur-of-the-moment personal appearance at Concord Community Park (see the spot here), which was right by my house. I was about four or five at the time, and I sat on my brother’s shoulders while Williams came in, riding a small helicopter. He stayed maybe ten minutes or so. Only the people in the neighborhood knew about it and the papers didn’t have time to cover it before or after. I think that’s what Williams was going for, because he was a Bay Area guy and liked talking to people. He always said us Bay Area folks made him feel normal. Although I didn’t understand it then, the thing that drew me to Williams was that he was zany and twinkly, like a kid who knows he’s getting away with something. Plus, I’ve always loved language and playing with language, and Williams was a master in that regard.

The first film I remember seeing Robin Williams in was Good Morning, Vietnam. Sure, he’d been in other films before that, like Popeye and The World According To Garp, but in those movies Williams had been basically confined to the characters he played. As Armed Forces Radio DJ Adrian Cronauer, Williams was able to utilize the off-the-cuff nature of live radio to his advantage, letting loose as only he could. At the same time, the film made subtle commentary about what made the Vietnam War such a confusing business.

Here’s a refresher in case anyone wants a recap: It’s 1965. Armed Forces Radio Service is humming away in Saigon, and in a word, it’s dry. It’s clinical, boring, and colorless, but it does give helpful tips to the GIs about things like how to recover lost luggage. Elsewhere in town, Air Force Lieutenant Adrian Cronauer (Robin Williams) arrives at the Army airport to join the radio staff. Lieutenant Eddie Garlick (Forrest Whitaker) is there to meet him. He’s a nice guy who’s only slightly awkward, and has a habit of leaving engines running and then forgetting the vehicle’s already started.

As the two of them drive through town, it’s clear that Cronauer’s from a whole different world. He was stationed in Crete, and instead of his Air Force uniform, Adrian dresses like a Greek. He doesn’t say much about Crete, except that it seems to have a shortage of attractive females. Cronauer reacts to a beautiful Vietnamese woman he sees like a thirsty camel at an oasis. He wants to chase her down, except that Garlick is the one driving, and they have a place to be.

Cronauer’s fame has preceded him–the other DJs are stoked to have someone with a sense of humor in their midst, but Cronauer’s superiors, not so much. One of them, Sergeant Major Dickerson (J.T. Taylor) is a big-time jerk who hates comics, and the other is a wannabe funnyman, Lieutenant Hauk (Bruno Kirby) who has other issues. Cronauer’s show, a section of an early morning line-up called The Dawn Busters, begins with a cheerful flute trilling, which he follows with a funky, super-charged “Gooooooooooood morning, Vietnam!”

Cronauer at the mic is a revelation for everyone. He’s energetic, he’s spontaneous, he has plenty of hysterical things to say about the war, he does voices. He plays the Beach Boys and Martha and the Vandellas instead of Percy Faith and Ray Conniff like all the other DJs. He goes outside the language guidelines. He parodies the news headlines. In short, he’s Robin Williams. He inspires his fellow jockeys to begin stepping up their games, putting more expression into their voices and adding a bit of patter.

And in short, Dickerson and Hauk are incensed. Hauk in particular is jealous, especially once Cronauer becomes an instant hit, and he and Dickerson look for ways they can sideline him. After Cronauer does a rather blue mock interview with Richard Nixon, Hauk tries to take over Cronauer’s show. Spoiler alert: Hauk is a perfect non-entity, prompting flurries of onion letters and irritated phone calls from the soldiers.

(On a side note, I think the person who had the hardest job in Vietnam was Bruno Kirby. Seriously. The guy had to be in the same room with Robin Williams all day long, and no matter what he said, Bruno kept a straight face. Meanwhile, the other actors were falling off their chairs laughing. Maybe Bruno laughed in between takes, who knows.)

Cronauer isn’t stuck in the studio all day; Garlick shows him a bar called Jimmy Wah’s where a lot of the G.I.s go. Cronauer also finds the girl he saw on his first day in Saigon, only this time he swipes a bike and follows her. Garlick warns him about Vietnamese culture and how they expect people to adhere to a very specific social structure, but Cronauer doesn’t care. When he discovers she’s gone to an English class, he bribes the teacher to let him teach it, and being Cronauer (and Williams) he throws out the boring textbook. He not only teaches the students American slang, but some choice cuss words, just in case they find themselves on the streets of New York. Cronauer ends up staying on as the regular teacher and gets to know his students.

Speaking of whom, Cronauer does meet the girl, whose name is Trinh (Chintara Sukapatana) but her brother, Tuan (Tung Thanh), intercepts him. Cronauer befriends him, but Tuan is suspicious at first because he thinks Cronauer is only doing it to get close to Trinh. He’s seen too many Americans who treat Vietnam like a meet market, so he’s understandably cautious. Cronauer and Tuan get to be friends, though, and Tuan shows Cronauer a few of the ins and outs of Vietnamese culture. Tuan also sets up a date for Cronauer and Trinh…plus about a dozen of Trinh’s relatives. The group of them go shopping and to a movie, Beach Blanket Bingo (with subtitles in several languages, of course).

While this all is very interesting, Cronauer’s forays out of the radio station show how insulated he is from what’s happening to the soldiers in combat. Happy, chipper music is often juxtaposed with scenes of soldiers on the front lines and buildings burning. One montage of a student uprising and other signs of unrest are set to Louis Armstrong’s “What A Wonderful World.” None of this reality is mentioned on the air, because censorship abounds, and Cronauer balks at having to hold himself back. When he barely survives a restaurant bombing, Cronauer is naturally shaken, but still has to go on the air and act like nothing happened. The movie portrays this as the powers-that-be not allowing him to be honest, but as the real Cronauer later said, there was more to it than that.

Even if Cronauer’s character’s perspective had been different, he still would have been mystified as all get-out. Regardless of anyone’s position on the Vietnam War, the fact remains that it had no clearly defined objective (besides squelching communism) and no obvious enemies, especially as time went on. It was, for all intents and purposes, organized military units fighting against guerillas. In Vietnam, certain people Cronauer knows aren’t who they say they are, and he doesn’t know whom he can trust. “It’s like hunting with Ray Charles,” he says.

Robin Williams’ radio monologues and schtick are brilliant; in fact, it’s worth watching the whole movie just to see them. Forrest Whitaker is a terrific foil, and he gets to bring in his own brand of humor. My guess is that he’s based in a small way on Cronauer’s successor, Cramer Haas, who kept Cronauer’s famous sign-on phrase after Cronauer’s hitch was up. As far as the Vietnam War is concerned, the film is also one of the first to portray Americans in Vietnam as real people and not cold-blooded monsters.

The film is a fun one, but I wish they had made it more about Adrian Cronauer’s actual experiences. However, this wasn’t possible for various reasons. Here’s the real Cronauer talking about the film and about his time with the AFRS. There’s a lot of mythbusting and a few spoilers, so if anyone hasn’t seen the movie, well, you know:

Cronauer doesn’t mention it here, but he wrote a treatment for a script about his time in Vietnam, which no studio would accept. In the end, less than half of Cronauer’s ideas made it into the film. It’s a shame, but it’s also Hollywood. FYI, the film is rated R for language and sexual references, which is to be expected because it’s a bunch of guys in a war zone. That aside, Good Morning Vietnam is a fun showcase of Robin Williams’ comedy.

That does it for Day One of my Robin Williams posts. Check in with Gill and Crystal for more, and see you tomorrow for Day Two! Thanks for reading, all…