Have you ever explored a B-17? I had the opportunity a few years ago, which was an amazing experience. The plane was the same one that appeared in the movie, Memphis Belle, and it’s not only beautifully maintained, but it still flies. There was so much more to seeing the plane than being where Sean Astin, Harry Connick, Jr. and Eric Stoltz had been, too. Bombers look big from the outside, and the B-17 was one of the more spacious planes, but it was still pretty cramped, especially the ball turret and the catwalk across the bomb bay. That bomber crews were able to work in these itty-bitty environments under intense pressure speaks very well of their training and the design and workmanship of the aircraft. I’ve grown up hearing about planes from my dad, but I was able to come away that day with a whole new appreciation for the B-17. I also have been able to look at familiar movies in a fresh way, one of them being the 1943 ensemble film Air Force, the cast of which includes John Garfield, Harry Carey, and John Ridgely.

Air Force is the story of a B-17, the Mary-Ann, and her crew, led by Captain Quincannon, who have been assigned to make what they think is a routine flight to Hawaii. All of the men are over the moon about the idea, except for John Garfield’s character, Joe Winocki, who has a massive chip on his shoulder. Joe wanted to be a pilot, but was washed out of flight school after an accident and retrained as a waist gunner, which he’s good at but too stroppy to appreciate. Since he didn’t get what he wanted, Joe wants to leave the Air Force behind, and as his enlistment is almost up, he figures the trip to Hawaii is just another way to run out the clock.

Here’s where the dramatic irony creeps in. When the navigator, Monk Hausen, writes “December 6, 1941” in his logbook, we all know what’s ahead, but the characters don’t. The second radioman, Chester, is excited about being aboard the Mary-Ann and has his sights set on a commission. Robby, the crew chief, looks forward to his son having a long and distinguished career in the Air Corps. Bill, the co-pilot, dreams of meeting up with the bombardier, Tom’s sister, Susan, in Hawaii. Weinberg, the assistant crew chief, is content to do his job and groove to Duke Ellington on the radio. Everyone except Joe is starry-eyed about the future.

That’s why when the characters get their first inkling of the attack on Pearl Harbor, it seems like a hoax. Joe even kids the chief radioman, Petersen, about having picked up Orson Welles. Stuff gets real very quickly, however, and one by one, their plans either change or are put on hold. The crew of the Mary-Ann have no choice but to plunge right into the confusing craziness and horror that made up December 7th and the days immediately following.

Pearl Harbor was one in a series of attacks by the Japanese on American military and civilians of various nationalities across the Pacific. In a nutshell, Air Force consists of the Mary-Ann and her crew island-hopping many of these locations, heading for Australia. Their first stop is an emergency landing strip on the island of Maui, but it turns out to be full of snipers, so they head to Hickam Field on Oahu. Here they visit Susan, who is critically wounded and in the hospital. They also take on a passenger, a pursuit pilot by the nickname of Raider, who is critical of bombers and likes his planes small.

From Oahu they go on the Wake Island, which is up in flames. The Marines there are tough  and resolute, but clearly outgunned and they know it. Several of them even persuade Weinberg to take a cute little terrier named Tripoli, who barks or bites legs at the word, “Moto”. Weinberg reluctantly agrees, even though it’s against regulations. He almost gets in trouble when Robby discovers Tripoli too, except that Joe covers for him.

As they get farther and farther across the Pacific, the crew gets more and more frustrated as they see the destruction wrought by the Japanese attacks, but there’s nothing they can do officially until war is declared. Even cynical Joe rethinks getting out of the Army. Fortunately for the crew’s catharsis (and that of 1943 audiences) they get to hit back more than once, and do some damage to boot.

The Mary-Ann’s first chance comes at Clark Field in Manila, Philippines, where the American forces are in desperate need of large-scale weapons. Deaths of certain characters fuels their ire further, and they shoot down Japanese fighters with gusto. They even modify the Mary-Ann‘s tail and add a gun, which is a great ace in the hole (no pun intended). It comes in handy at the Battle of the Coral Sea, where the Mary-Ann also plays a very important role.

The fact that the Mary-Ann‘s crew relishes killing Japanese combatants may be a tricky thing for today’s audiences. The temptation with a movie like Air Force is to look at it through a presentist lens, but that’s a disservice, as it’s meant to reflect what many Americans thought and felt during the war. Sure, today it seems like propaganda, but back then there was a lot of animosity towards the Japanese (To be clear, I’m referring to the Japanese who were fighting against the Allies, not Nisei and Issei Japanese, which are completely different). Audiences who watched the film in 1943 would have been aware of Wake Island, Corregidor and Bataan, of the Battle of Guadalcanal, and other happenings in the Pacific theater. Not to mention, Pearl Harbor was a recent memory. In a way, it’s like what people felt right after 9-11. Plenty wanted to storm Afghanistan and take out Osama bin Laden as soon as they found out he was behind the attack. People were angry in 2001 just as they were in 1941, except that political correctness didn’t exist in the nineteen-forties. In my humble opinion, the best thing to do is to look at Air Force as a product of its time. 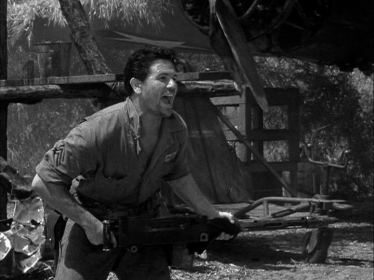 Other than that, certain historical details aren’t so spot-on. That may have been due to some information being classified, or it may have been plain old human error. For instance, one of the officers at Hickam Field mentions “A lot of fifth-column work, too,” when recounting the attack to Captain Quincannon. In reality, there were no recorded instances of fifth-column work before, during, or after the attack on Pearl Harbor. It’s also the second movie I’ve seen that supports the myth of the Marines on Wake Island having a dog, so methinks in both cases the dog was there for comic relief. Plus, in the film the crew departs from Hamilton Field, while the radio version of the film has the Mary-Ann taking off from Maither Field. This was probably changed because Maither is (or was) a real Air Force base–it’s a head-scratcher that an actual base is mentioned.

Beyond its dated elements and small flubs, there are so many good points to the film. Every member of the cast is superb. Air Force is meticulously accurate as to the workings of a bomber crew, and viewers get an excellent idea of what it was like to be aboard one of these ships. As for John Garfield, he’s pugnacious in his role of Joe Winocki, and it’s great watching his character learn to pick his battles. There is clear satisfaction on his face throughout Air Force. Garfield was never able to serve in the armed forces himself, due to a heart condition he acquired from scarlet fever. No doubt he felt movies like this were a way of contributing to the war effort, and they were–they helped keep audiences fired up and reminded them of why America was fighting the war in the first place.

Thus concludes my part in Day One of the John Garfield: The Original Rebel Blogathon. More contributions are waiting at Phyllis Loves Classic Movies if anyone is so inclined. Hope you enjoyed, and see you tomorrow for Day Two…

8 thoughts on “Into the Wild Blue Yonder”